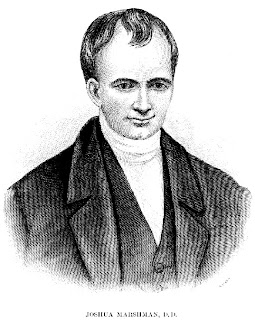 Joshua Marshman, Missionary to India, born on 20th April 1768 in Westbury Leigh, Wiltshire, England. His father, John Marshman was a weaver, a man of fervent piety and his mother was a woman of superior mental gifts as well as of deep spirituality. At fifteen years old, a bookseller in Holborn, who had formerly resided in Westbury Leigh, proposed to John Marshman that his son should come to the metropolis and help in his shop. Joshua Marshman, who was passionately fond of reading, was now in a congenial atmosphere, but he soon found that his duties left him little leisure.
In 1791, Joshua Marshman married Hannah Shephard who possessed in an eminent degree those qualities of heart and mind which fitted her to be a help-meet to her husband. Three years after his marriage, in 1794 they moved from Westbury Leigh in Wiltshire to Broadmead, Bristol. In Bristol, they joined the Broadmead Baptist Church and he accepted the position of master of a school in Broadmead, Bristol and here he taught in a local Charity School supported by the church for five years. At this time he also studied at Bristol Baptist College. Eventually, he enrolled at Bristol Academy where he studied and advanced himself in Latin, Greek, Hebrew, and Syriac. Through the Periodical Accounts of the Baptist Missionary Society, Marshman learned about William Carey's work in India and volunteered to join him and made hasty preparations to join the party about to sail for India.
On 29th May 1799, Joshua, Hannah and their then two children set out from Portsmouth for India aboard the ship "Criterion". Although there was a threat of a French naval attack the family landed on 13th October 1799 at the Danish settlement of Serampore, a few miles North of Calcutta. Marshman, along with his wife Hannah, William Ward, Mr.Brundson, Mr.Grant and joined William Carey in Serampore. The couple had 12 children; of these only five lived longer than their father. Their youngest daughter Hannah married Henry Havelock, who became a British General in India and whose statue is in Trafalgar Square, London. 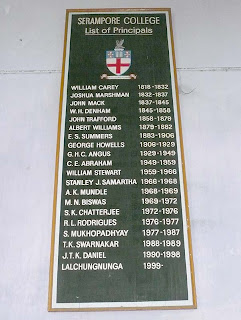 Marshman and the Pioneer Missionary William Carey together translated the Bible into many Indian Languages as well as translating much classical Indian literature into English. At this time, Marshman also translated the Bible into Chinese and had an important role in the development of Indian newspapers. He was a keen proponent of the new developments in educational practice and was keen to encourage school teaching in local languages, even though the colonial authorities preferred that lessons be given in English.
Joshua Marshman was an accomplished scholar, linguist and theologian and was a prolific author and polemicist. After learning Bengali and Sanskrit, Marshman and William Carey published through the Serampore Press, the Bengali form of The Ramayuna of Valmeeki, (Vol. I-1806, Vol. II-1808). He also published A Dissertation on the Characters and Sounds of the Chinese Language (1809), a translation of Confucius (1809) and Clavis Sinica (1814). In 1818, Marshman started a Bengali newspaper Sumachar - Durpan (i.e., Mirror of News) as well as the monthly magazine Friend of India. In 1811, Brown University, Providence, Rhode Island, awarded Marshman an honorary Doctor of Divinity degree. 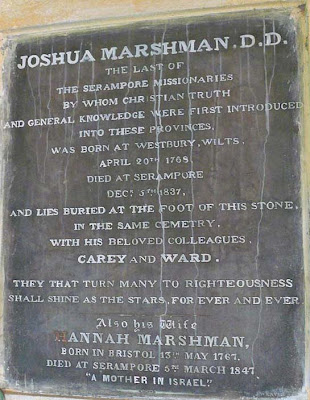 Significantly, on 5th July 1818, William Carey, Joshua Marshman and William Ward issued a prospectus, written by Marshman for a proposed new "College for the instruction of Asiatic, Christian and other youth in Eastern literature and European science". Thus was born Serampore College, which still continues to this day. Marshman also has the honor of being the first to have translated the Bible into Chinese. In 1821, the Serampore Press published the first translation of the Bible into Chinese, the work on which Marshman had spent fifteen years.
In the early 1820s, Marshman engaged in a polemical debate with Ram Mohum Roy concerning the deity of Jesus and the Christian doctrines of the atonement and the Trinity. The debate focused on Roy's Unitarianism, which Marshman and the other Serampore missionaries strongly disagreed. Marshman wrote an extended monograph on the subject entitled A Defence of the Deity and Atonement of Jesus Christ, in Reply to Ram Mohon Roy of Calcutta.
Marshman died on 5th December 1837 at Serampore, India and lies buried at the foot of this stone, in the same Cemetery with his beloved Colleagues, William Carey and William Ward. Hannah Marshman died in 1847. William Carey, Marshman and William Ward worked cooperatively and came to have the name "the Serampore Trio." Marshman's son, John Clark Marshman, an eminent scholar wrote a definitive treatment of the Serampore Trio. Marshman was appalled by the neglect with the way in which William Carey looked after his four boys, aged 4, 7, 12 and 15; they were unmannered, undisciplined and even uneducated. Marshman, his wife Hannah and their friend the printer William Ward took the boys in tow. Together they shaped the boys as Carey pampered his botanical specimens, performed his many missionary tasks and journeyed into Calcutta to teach at Fort William College. They offered the boys structure, instruction and companionship.