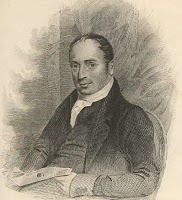 William Ward an English pioneer Baptist missionary, author, printer and translator was born on 20th October 1769 at Derby in England. He lost his father while he was a child and the care of his upbringing fell to his mother. Since left from school, he was apprenticed to a Derby printer and bookseller Mr.Drewry, with whom he continued two years after the expiry of his indentures, assisting him to edit the Derby Mercury. He then moved to Stafford, where he assisted Joshua Drewry, a relative of his former master, to edit the Staffordshire Advertiser and in 1794, he proceeded to Hull, where he followed his business as a printer and was for some time editor of the Hull Advertiser. In the autumn of 1798, the baptist mission committee visited Ewood and he offered himself as a missionary, influenced perhaps by a remark made to him in 1793 by William Carey concerning the need for a printer in the Indian mission field.
In May 1799, William Ward sailed from England in the Criterion in company with Joshua Marshman. Arriving at Calcutta, he was prevented to joining William Carey by the Government and was thereby obliged to proceed to the Danish settlement of Serampore, where he was joined by William Carey. In India, his time was chiefly occupied in overseeing the community's printing press, which was used to disseminate the scriptures, once they had been translated into Bengali, Maratha, Tamil and twenty-three other languages. Numerous philological works were also issued and he still found time to both keep a copious diary and to preach the gospel to the natives.
He married a widow of John Fountain, another missionary, by whom he left two daughters on 10th May 1802, at Serampore. Until 1806, he made frequent tours amongst the towns and villages of the province, but after that year the increasing claims of the press on his time and the extension of the missionary labours in Serampore and Calcutta, prevented him quitting headquarters. In 1812 the printing office was destroyed by fire. It contained the types of all the scriptures that had been printed to the value of at least ten thousand pounds. The modules for casting fresh type however were recovered from the debris and with the help of friends in Great Britain the loss was soon repaired. 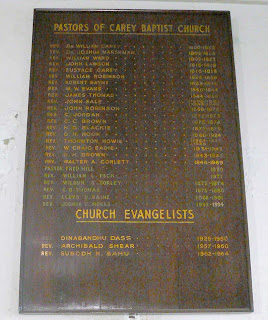 Significantly, on 5th July 1818, William Carey, Joshua Marshman and William Ward issued a prospectus for a proposed new "College for the instruction of Asiatic, Christian and other youth in Eastern literature and European science". Thus was born Serampore College. He having been for some time in bad health revisited England in 1818. Here he was entrusted with the task of pleading for funds with which to endow a new college at Serampore for the purpose of instructing natives in European literature and science.
He undertook a series of journeys throughout England, Scotland and also visited Holland and North Germany. In October 1820 he embarked for New York and travelled through the United States, returning to England in April 1821. On 28th May 1821 he sailed for India in the Alberta, carrying funds for Serampore College; as a result William Ward, Marshman and William Carey became known as “the Serampore trio”. William Ward died on 7th March 1823 at Serampore in India due to cholera and was buried in the mission burial-ground. “Feeling gratitude and not expressing it is like wrapping a present and not giving it.” – William Ward, English missionary and author.