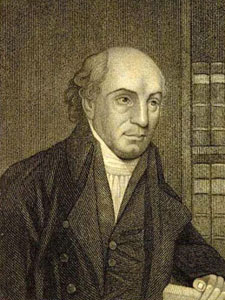 10. All my friends are but one, but He is all sufficient - William Carey
11. It is true all the reward is of mere grace… - William Carey
12. I can plod. I can persevere in any definite pursuit. To this I owe everything - William Carey
13. Wisdom is not a product of schooling but of the lifelong attempt to acquire it - William Carey
14. Education is what remains after one has forgotten everything he learned in school - William Carey
15. Christians are a body whose truest interest lies in the exaltation of the Messiah's kingdom - William Carey
16. The most glorious works of grace that have ever took place, have been in answer to prayer - William Carey
17. It can't do any harm. Any form of competition will even the market out. It might lower prices - William Carey
18. Surely it is worthwhile to lay ourselves out with all our might, in promoting the cause, and kingdom of Christ - William Carey
19. One of the first, and most important of those duties which are incumbent upon us, is fervent and united prayer - William Carey
20. If God intends the salvation of the heathen, he will some way or other bring them to the gospel, or the gospel to them... - William Carey
21. In respect to those who bear the Christian name, a very great degree of ignorance and immorality abounds amongst them - William Carey
22. We have only to keep the end in view, and have our hearts thoroughly engaged in the pursuit of it, and means will not be very difficult - William Carey
23. We must not be contented however with praying, without exerting ourselves in the use of means for the obtaining of those things we pray for - William Carey
24. The most glorious works of grace that have ever took place, have been in answer to prayer; and it is in this way, we have the greatest reason to suppose, that the glorious out-pouring of the Spirit, which we expect at last, will be bestowed - William Carey
25. Our Lord Jesus Christ, a little before his departure, commissioned his apostles to Go, and teach all nations; or, as another evangelist expresses it, Go into all the world, and preach the gospel to every creature - William Carey
WILLIAM CAREY’s Life Story……..
William Carey was born on the 17th August 1761 in a small cottage at Paulerspury, Northamptonshire District in England, in the heart of the district which had produced Shakespeare. His parents Edmund and Elizabeth had five children; Carey was the eldest of five children. His life was hard and his parents, who were weavers, were both literate and devout. A major…… (Read the full story)
Quotations