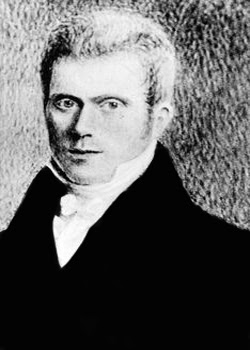 John Smith was an English missionary and the Demerara Martyr, born on 27th June 1790 at Rothwell near Kettering in Northamptonshire. He had the misfortune at a very early age, lost his father (name not known), who fell while fighting the battles of his country on the plains of Egypt. His mother being then left destitute, he was deprived of the advantage of an early education, except that which he derived from an occasional attendance at a Sunday school. At the age of fourteen, he entered the service of a biscuit-maker in London named Blunden which assisted him to improve his education. He married Jane Godden. He was accepted by the London Missionary Society and he was ordained on 12th December 1816.


He arrived at Demerara, a region in South America in what is now Guyana, on 23rd Feb. 1817 under the auspices of the London Missionary Society. He lived at the 'Le Resouvenir' plantation, where he preached at Bethel Chapel, primarily attended by African slaves. In his first interview with the Governor, Major-General-John Murray, the latter threatened that if he taught any negro-slave to read, he should be banned. Notwithstanding the undisguised hostility of the white population, he laboured among the Negroes with considerable success. In August 1823, his health condition broke down and he was recommended by his doctor to leave the colony.


On 18 August 1823, about ten to twelve thousand slaves drawn from plantations on the East Coast of the Demerara colony, known as the “Demerara Rebellion of 1823” rebelled, under the belief that their masters were concealing news of the slaves' emancipation. Subsequently, he was charged with promoting discontent and dissatisfaction in the minds of the African slaves, exciting the slaves to rebel and failing to notify the authorities that the slaves intended to rebel. In his trial he was defended by William Arrindell. He was arraigned in court-martial before Lt. Col. Goodman on 13thOctober.


His trial concluded one month later on 24th November; Smith was found guilty of the principal charges and was given the death sentence, on the worthless evidence of terrorised slaves. His execution was postponed until the pleasure of the home government should be known. But he was confined in the meantime in an unhealthy dungeon and died there on 24 Feb. 1824 due to his pre-existing illness. His wife Jane, whom he married about the time of his ordination, died in 1828 at Rye in Sussex. They had no children.


When the news of Smith's imprisonment reached England, popular interest was aroused. The publication of the documents connected with the case by the London Missionary Society intensified the excitement and upwards of two hundred petitions on his behalf were presented to parliament in eleven days. On 1stJune 1825 his trial was debated in the House of Commons. Lord Brougham brought forward a motion condemning the action of the Demerara Government and asserted that ‘in Smith's trial there had been more violation of justice, in form as well as in substance, than in any other inquiry in modern times that could be called a judicial proceeding.’ After an adjournment, however, the motion, which was opposed by Government, was negatived by 193 to 146.
Missionary Biography