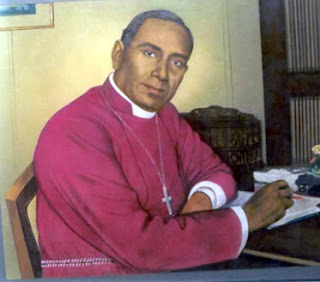 Vedanayagam Samuel Azariah, the First Indian Anglican Bishop, Dornakal, was born on 17th August 1874 in an obscure village, Tirunelveli District, Tamilnadu, India. His father Velayudam was a Hindu and came to Christian faith, adopts the name Thomas Vedanayagam, an Anglican priest and Ellen, a woman with a deep love and understanding of the Holy Scriptures, was his mother. He was his parents’ first and only son. Azariah had a very humble beginning, his father died early, so he was brought by a widowed mother who neither spared the rod nor spoiled the child but was a dominant influence in his life. There was no softness in the upbringing of the future leader of the Church.


Azariah attended the village school where the boys learnt to read from the Palmyra leaf books and traced their alphabets with their fingers on sand. At the age of ten, he was sent to the boarding- School. After passing through boarding- School, he went to Church Mission College at Tirunelveli. In 1893, after a year as a pupil leader in the C. M. S. high School at Palayamkottai, then he migrated to the Christian College, Madras, where he joined the B.A Degree and there the principal gave the name Azariah, which he became famous.

Azariah was born into a very spiritual atmosphere; his father was an ordained minister of the Anglican Church. From childhood onwards Azariah was dedicated to GOD for His service by his parents and he had a great love for missionaries. The wider background of the common life of the Tirunelveli Church also influenced him to commit him for the service to the Lord. There was no recorded incident of a definite conversion experience in the life of him; his family back ground was simple and deep evangelical piety. His life in boarding- School also helped him come closer to GOD and to grow in Christian experience and commitment.


At the age of 19, Azariah was in contact with YMCA since 1893 when he was a college student in Madras (Chennai). He was an active member for three years and he developed a special affection for the YMCA. After completion of his study at Chennai, he was offered the post of secretary of YMCA for South India and continued for the next thirteen years. During this time, he came to contact with Sherwood Eddy, the traveling Secretary for the YMCA in India and Ceylon. He considered YMCA secretary-ship as a call from GOD. As YMCA secretary, he dedicated himself work with humility, gratitude and sincerity of purpose. In 1898, he had married Ambu Mariammal Samuel, one of the first Christian women in South India to take a college course, which described as "The most spiritually minded girl in Tirunelveli." 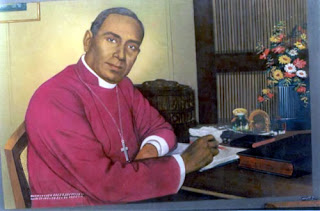 In the year 1902, Azariah had come on a mission to Jaffna in Sri Lanka, there he found a completely indigenous missionary society, worked and supported entirely by Tamil Christians and for the first time faced the bitter truth that India, with all its religious heritage, had allowed the spread of the gospel to be undertaken by foreigners. He felt ashamed to think of his own church in Tirunelveli, with it all richness, not having any efforts for mission. He returned to his home (Tirunelveli) and shared the vision with other like minded Christians. They prayed and in February 1903, they founded the “Indian Missionary Society of Tirunelveli” (IMS) with Azariah as its first Secretary. Its principles were; “Indian men, Indian money and Indian engagement and an area of work where no other missionary society was working”. Later they found Dornakal to be such a place and decided to start the work. The Bishop gladly accepted the proposal and recognized as the new mission.


Azariah was more encouraged by the YMCA’s promotion of the Indian leadership. The Church Mission Society missionaries had actually put mission theory into practiced by trying to establish self-governing, self-supporting and self-propagating churches. These gave more encouragement to promote Indian leadership and a secure belief in the Indian church’s ability to manage his own affairs and prompted him to launch another indigenous missionary society. On Christmas Day in 1905, in Carey’s historic library at Serampore, National Missionary Society of India (NMS) was launched by a group of Indian leaders, with Azariah as its first General Secretary. The NMS was an interdenominational society aiming to spread Christianity in India and surrounding territories such as Afghanistan, Tibet and Nepal. 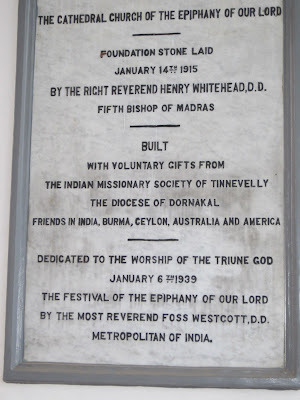 Azariah’s IMS movements brought a turn in the century to a new step by establishing autonomous missionary societies. IMS and NMS are the most ambitious Indian missionary endeavors, founded by Indian Christians; they remained organizationally distinct from the western societies. Azariah, an ex- untouchable, became a champion of ecumenism among the Churches of South India. He contended that Churches had to become missionary Churches. For many years he was the Chairman of the National Christian Council of India (NCCI), an effectual participant in the International Missionary Council (IMC) and one of the leaders in the movement which emerged as the Church of South India in 1947. He was modern India’s most successful leader of the depressed classes and of non- Brahmin conversion movements to Christianity during the early twentieth century. He lived to see a diocese of over one hundred thousand members where forty years before there had been only eight thousand.


At the age of 35, Azariah left the YMCA to become an ordained Anglican missionary of the IMS to Dornakal in 1909 at the Telugu speaking dominion of the Nizam of Hyderabad. As a missionary priest, Azariah regarded himself primarily as an evangelist. He lived in a tend and travelled to distant villages on his bicycle with his food packet, tracts, gospel portions etc. Thus he worked for three years as an ordinary missionary in the villages of Andhra Pradesh. He took great pains to master Telugu and its literary style as well as the village idiom. He loved Andhra with its fine old culture and preserve as part of the heritage of the Telugu Church. The six pastors were worked under his care mainly with outcasts.

As the first Secretary of the IMS of Tirunelveli, he was responsible for sending the first missionaries to Dornakal. After a meeting in Madras where he appealed for people to go as missionaries, suddenly he felt a burden that he must go himself. Azariah was become as the first Indian Bishop in the Anglican Church in December 1912 and he was placed in charge of the diocese of Dornakal. He has known in Dornakal Diocese by the affectionate honorific Thandrigaru (father). He remained the only Indian diocesan bishop in the Anglican Church until his death. As a bishop, he didn’t have all the comforts and luxuries; he worked under considerable limitations and hardships. Travelling was so difficult, there were no roads and only means of travel was by bullock-cart or on foot. To avoid the heat of the day the Bishop travelled by night. He had to face the thieves and the danger of the tiger- infested forest. But he was willing to pay the price to fulfill his mission to the people of Dornakal.

< Azariah died on January 1, 1945, two years before the inauguration of the united Church of South India (CSI). There was great evangelical moment during his tenure. At the end of his life the Diocese grew to 240,000 Christians. He also established Dornakal Diocesan School for girls, later Bishop Azariah High School for Girls. The Bishop Azariah College in Dornakal is also named for him and is the only college in the Diocese of Dornakal. The college was established with the objective of providing education to both Christians and non-Christians. He is one of those little- known leaders whose life sheds new light on the challenges and opportunities faced by religious minorities throughout the world today. As a Christian leader in a non-Christian culture, he negotiated complex cultural, social, political and economic pressures with exceptional skill and diplomacy. He promoted evangelism and Christian unity in India and was determined that Indian Christianity should be indigenous. A commemoration in his honor is celebrated on January 2 on the Calendar of saints of the Episcopal Church in the United States of America. His life, contributions to the mission, methods used in mission and the lessons from the methods are the main area of discussion.
Missionary Biography