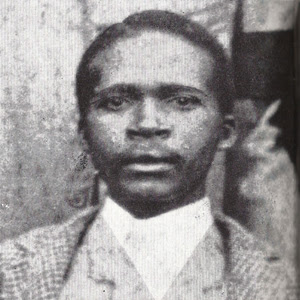 Bernard Mizeki was an African Christian Missionary and Martyr, was born in 1861, at Mamiyeri Mitseka Gwambe in Inhambane, Portuguese East Africa (Mozambique). His parents belong to Shangaan origin named Mamiyeli Mitseki Gwambe. He received no formal education during the early part of his life, there was no local school. He was twelve years old, he left his home and went to Capetown, South Africa, where for the next ten years he worked as a labourer, living in the slums of Capetown, but firmly refusing to drink alcohol and remaining largely uncorrupted by his surroundings. After his day's work, he attended night classes at an Anglican school. Under the influence of his teachers from the Society of Saint John, the Evangelist, particularly the German missionary Baroness Paula Dorothea von Blomberg, he became a Christian and was one of the first to be baptized in St Philip's Mission, Sir Lowry Road on 09 March 1886. Then, he mastered English, French, high Dutch and at least eight local African languages. In time he would be an invaluable assistant when the Anglican Church began translating its sacred texts into African languages. Shortly after his baptism, he started work at St Columba's Hostel, which was run by the missionaries for African men. Within a few months he was sent to Zonnebloem College to train as a catechist.


Befriended by Anglican missionaries, he was baptized on March 9, 1886, receiving the name Bernard. He later enrolled at Zonnebloem College to train as a catechist. In 1891 Bernard volunteered as a catechist for the pioneer mission in Mashonaland, and was stationed at Nhowe (in present-day Zimbabwe). After graduating from the school, in January 1891, he accompanied the new missionary Bishop of Mashonaland, George William Knight-Bruce, as a lay catechist among the Shona people in Southern Rhodesia, (now Zimbabwe) to work there as a lay catechist. In 1891, the bishop assigned him to Nhowe, the village of paramount-chief Mangwende and there he built a mission-complex. He prayed the Anglican hours each day, tended his subsistence garden, studied the local language (which he mastered better than any other foreigner in his days), and cultivated friendships with the villagers. He eventually opened a school and won the hearts of many of the Mashona through his love for their children.


He moved his mission complex up onto a nearby plateau, next to a grove of trees sacred to the ancestral spirits of the Mashona. Although he had the chief's permission, he angered the local religious leaders when he cut some of the trees down and carved crosses into others. Although he opposed some local traditional religious customs, he was very attentive to the nuances of the Shona Spirit religion. He developed an approach that built on people's already monotheistic faith in one God, Mwari, and on their sensitivity to spirit life, while at the same time he forthrightly proclaimed the Christ. Then he was sent to work in the Marandellas (Marondera) district among the Nhowe people, over the next five years (1891-1896), produced an abundance of converts and settled in the kraal of Mangwende Mungati. Bernard built his home there, and took people who wanted to learn into his home to teach them the gospel. In March 1896, Bernard married Mutwa, later ‘Lily’, a granddaughter of the Mangwende and a Christian convert.


Many black African nationalists regarded all missionaries as working for the European colonial governments. During the Matabeleland Rebellion in 1896 against the Europeans and their African friends, Bernard was especially marked out, in part because he had offended the local witch doctor. While missionary workers were being ordered to safety, Bernard felt that his absent bishop’s orders to stay could not be overruled. On a Sunday that June the witch doctor ordered the people in Nhowe not to attend Bernard’s morning service, though Evensong that day was well attended. Upon hearing of this, the witch doctor threatened to kill Bernard and to punish the people who had attended the Christian service against his orders. Though warned to flee, Bernard would not desert his converts at the mission station.


On the night of 18 June 1896, he was dragged from his home and stabbed. He managed to crawl to a nearby hillside where his wife, Mutwa found him still alive and went for help and leaving him for a short time to fetch blankets. Before she could return with another woman, she and others reported seeing a great white light all over that place, and a loud noise “like many wings of great birds” and by a dazzling light that moved toward the spot where Bernard lay. When the women had summoned the courage to go to the place where Bernard lay, his body had disappeared. His body was never found, and the exact site of his burial is unknown. Mchemwa, a son of the Mangwende and an ally of the witch doctors, was later found to be responsible for Bernard's murder and the removal of his body, as well as the destruction of the mission settlement there. The place of his death has become a focus of great devotion for Anglicans and other Christians and one of the greatest of all Christian festivals in Africa takes place there every year around the feast day that marks the anniversary of his martyrdom, June 18.


Bernard Mizeki’s work among the Shona bore fruit. After long years of earlier mission work in Mashonaland by white missionaries, the first Shona convert to be baptized was one of the young men whom Bernard had taught: John Kapuya. John was baptized only a month after Bernard’s death, on 18 July 1896. Bernard Mizeki is revered as a hero of the faith in Africa. Today, Bernard Mizeki College stands close to where he lived and the Mangwende's kraal, above the village, is crowned with a large cross to commemorate Bernard. A shrine near the place of his martyrdom attracts pilgrims to this day. Every year, on the Saturday nearest June 18, a special liturgy of Holy Communion in held to commemorate the Anglican protomartyr of Central and Southern Africa.
Missionary Biography