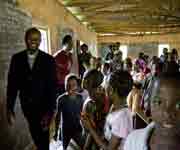 Churches are playing a vital role in tackling the spread of HIV and Aids and breaking cultural stigma, according to a new report from Christian Aid.

The report contradicts the popular notion that faith communities are an obstacle to the effective treatment and prevention of HIV and Aids. Whilst acknowledging that abstinence remains the most reliable way of avoiding exposure to HIV, the Christian Aid-supported work takes the approach that this cannot be taught in isolation.

The report details the work of Christian leaders in countries with high HIV rates who have overcome social taboos to openly teach about the importance of sexual health and condoms in preventing the spread of the disease.One example is Canon Gideon Byamugisha, a founding member of INERELA+, an international network of around 10,000 religious leaders living with, or personally affected, by HIV.

He is also a Christian Aid ambassador who runs workshops with other faith leaders on HIV and stigma. "It was Canon Gideon’s personal experience of stigma, and the day-to-day reality of his life as someone living with HIV, which presented unavoidable truths to faith leaders, many of whom had misguidedly perpetuated fear and discrimination themselves," the report states.

In addition to the effectiveness of peer-led awareness, the report points to the huge influence of religious leaders in the education of local communities. It highlights the example of the Rev Joseph Njakai, an Anglican priest based at Daystar University. "He suggested that when he speaks to a congregation to persuade them to accept people living with HIV rather than reject them, that perhaps 50% will hear and understand him, while the other 50% accept his words solely as “blind faith”, meaning that they do not genuinely believe what he says, but they accept it anyway because he is a recognised religious authority," the report said.

Ray Hasan, Christian Aid's head of community health and HIV said: "We are encouraged by the affirmation of the critical role that faith leaders are playing in increasing awareness of HIV and reducing HIV-related stigma. "We are also pleased to hear of the profound impact this role has on people’s attitudes towards HIV testing, their ability to seek treatment and care and the collective support that communities provide.

"The organisation recognises the need to continue to strengthen the role of religious peer educators and accepts that the current impact is constrained by limited scale”. We will continue to work with Canon Gideon, INERELA+ and our other faith partners to train and inspire more faith leaders to take on this role."