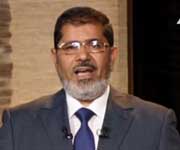 Christian Solidarity Worldwide has called upon Mohammed Morsi to uphold civil and religious liberties. The religious rights organisation welcomed the election of Egypt's first democratically elected president at the weekend but voiced concern over the influence of the military and the Muslim Brotherhood.

In his victory speech, Mr Morsi pointed to an inclusive government and the importance of building national unity across the religious divide, stating that “Muslims and Christians are advocates of civilisation and construction". He also pledged “respect for human rights, maintaining rights of women and children". "Egypt is for all Egyptians; all of us are equals in terms of rights," he said.
As an active member of the Muslim Brotherhood, Mr Morsi spent time in prison during Hosni Mubarak's regime. He became President of the Freedom and Justice Party, the political party of the Muslim Brotherhood, after the 25 January revolution.

Although Mr Morsi has promised to appoint a Christian vice-president, CSW expressed concerns about the Muslim Brotherhood's influence on the government and the drafting of the new constitution. It also voiced caution over the role of the military establishment after the Supreme Council of Armed Forces (SCAF) moved last week to limit the powers of the president.

CSW’s Chief Executive Mervyn Thomas said, “CSW congratulates the Egyptian people on the election of their first democratically elected president”. "We particularly welcome Mr Mursi's stated commitment to equality of citizenship regardless of creed, age and gender, and urge him to follow through his encouraging statements on inclusive government for Egypt with actions that support democracy, rule of law and equality before the law for all Egyptians, regardless of religious or political affiliation.” "
Source www.christiantoday.com