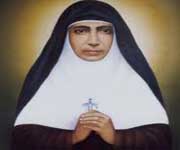 Blessed Maria Theresa Chiramel Mankidiyan, the servant of GOD and founderss of the Congregation of Holy Family, known as Mother Maria Theresa Chiramel and she was a Syro-Malabarese Catholic Nun. She was declared venerable on June 28, 1999 and was beatified on April 9, 2000 by Pope John Paul II. She was the fifth person from India be beatified. She sacrificed herself for others, with a preferential love for the poorest of the poor and so practicing the evangelical virtue of charity in heroic degree.

Childhood and Getting Baptism

Name: Maria Theresa Chiramel
Born: April 26, 1876, Puthenchira
Father: Thoma
Mother: Thanda Chiramel
Mission Work: Puthenchira, Thrissur
Died: June 8, 1926, Kuzhikattussery
Honored in: Roman Catholic Church
Beatified: April 09, 2000
Her feast day: June 08.
She was born on April 26, 1876 in the village of Puthenchira, Thrissur District, in Kerala, India. She was the daughter of Thoma and Thanda Chiramel. She was the third of five children, two boys and three girls. She was baptized Thresia Chiramel Mankidiyan on May 03, 1876. Growing up, GOD granted her a holy mother and a father so depressed by the loss of his family's wealth that he sought refuge in alcohol. From her early childhood, Jesus was leading her to great sanctity and she followed His lead wholeheartedly. If she had lived later in the 20th century she would have been as well-known as St Padre Pio and Blessed Mother Teresa of Calcutta. Thresia grew up in piety and holiness under the loving guidance of her saintly mother Thanda.
She used to fast four times a week and prayed the rosary several times a day. By the age of 10, Thresia promised Jesus that she would belong to Him alone for life. "From childhood my soul agonized with an intense desire to love GOD". By the age of 11 she was helping teach younger students the catechism. In 1888, her beloved mother died when she was 12 years old. She had no formal education as her mother died in her elementary school education, however, emerged as a great educationist and social reformer. She always worked for the poor and the sick and especially the downtrodden in the society and she dedicated herself to prayer in her church, to the service of the poor and sick and to the comfort of lonely people in her parish.

Her journey into religious life was a long one. After one or two early attempts to join a convent failed because of her caste and the poverty of her dowry, she had gone at living the life of a hermit but did not succeed. With three friends, she formed a prayer group and engaged in apostolic work on the streets, with the neediest families of the village including the untouchable's caste. Because they traveled unaccompanied by men they were severely criticized. Thresia placed her trust in the help of the Holy Family of Jesus, Mary and Joseph.
She saw them frequently in her visions and received guidance in her apostolate, especially for the conversion of sinners. She prayed for sinners, fasted for their conversion and visited them and exhorted them to repentance. Her ascetical and penitential practices are reminiscing of the extreme rigor of the ancient hermits and monks. She received several mystical gifts like prophecy, healing, aura of light, sweet odour. And like St. Teresa of Avila she had frequent ecstasies and levitations. On Fridays people used to gather to see Maria Thresia lifted high and hanging in the form of a crucifix on the wall of her room.
Like the well-known Blessed Padre Pio of Pietrelcina, she too bore the stigmata, carefully hiding it from public view. Perhaps to help her keep humble amidst such mystical favours, the Lord let her be tormented by diabolical attacks and vexations (again like Padre Pio) almost all through her life. She was repeatedly submitted to exorcism between 1902 and 1905 by Father Joseph Vithayathil, the parish priest of Puthenchira, acting under orders of the bishop, who wondered if she was simply a play thing of the devils. Thresia submitted to the bishop's orders with exemplary humility, but the exorcisms seem to have made some people regard Maria Thresia as a dubious saint, even as Saint Mary Magdalene, was eventually identified with the unnamed sinful woman in the Gospel (Luke 7: 36-50) on the presumption that a possessed person must be a sinner.
Did you know? Amy Wilson Carmichael who belongs to Australia, came to India in 1903

Maria Thresia had also to fight temptations particularly against faith and chastity and she passed through the dark night of the soul. From 1902 till her death she had Father Joseph Vithayathil was a Diocesan Priest and the co-founder of the Congregation of Holy family for spiritual director. She opened her heart fully and confidently to him and followed his advice and obeyed him blindly. Her extant letters fifty-three out of fifty-five are addressed to him seeking advice and spiritual guidance.
In 1903 she requested permission to build a house of prayer and retreat, but Apostolic Vicar Mar John Menacherry, the Archbishop of Trichur refused the request, and recommended that she test her vocation, as a child she was known as Thresia. After 1904, she wanted to be called Mariam Thresia as she believed that she was asked to add "Mariam" to her name by the Blessed Virgin Mary in a vision.

She expired on June 08, 1926 at Kuzhikattussery, Thrissur in Kerala, India, from a wound on the leg caused by a falling object. The wound defied cure owing to her diabetes. After her death the fame of Maria Thresia spread as she continued from heaven to succour the sick and the needy through miraculous favours. At the time of her death at the age of fifty there were 55 Sisters in the Congregation, 30 boarders and 10 orphans under her care. The co-founder Father Joseph Vithayathil continued, till his death in 1964, to nurture the Congregation, which grew steadily.

After Maria's death, they had established three convents, two day schools, two boarding schools, a study home and an orphanage. Now the Congregation operates in Kerala, in Northern India, Germany, Italy, and Ghana with over 170 houses. The cause of her beatification was taken up in 1982. She was declared Servant of GOD on October 05, 1973 and declared venerable on June 28, 1999 by Pope John Paul II, beatified on April 9, 2000 by Pope John Paul II. She was the fifth person from India to be beatified. Her feast day is on June 08.

Here is the Quotations and Gold lines of Maria Theresa Chiramel's Biography:-

I do strongly believe that GOD will not ask us to suffer anything beyond our capacity.
You must have the awareness that you are in the presence of GOD.
Don't talk too much. What is the advantage of it? You talk as if you were honest and just. Only GOD knows the inside and outside.
Death will catch hold of us like a thief. Nobody knows at what age and when it happens. When we die, we have to leave everything here on earth.
Love one another; help one another.
Suffer all the difficulties patiently and without murmuring.
Have you ever been to Devasahayam Pillai mountain?
Missionary Biography