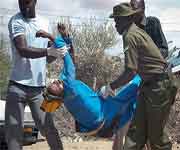 At least 58 people, including two lawmakers, were killed after suspected Muslim herdsmen attacked Christian villages near the city of Jos in Central Nigeria over the weekend. More than 300 people were displaced in attacks on several villages near Jos in the Plateau State, which lies between the Muslim majority North and the predominantly Christian South, Nigerian Red Cross official Andronicus Adeyemo said late Sunday.

Senator Gyang Dantong and majority leader of the Plateau State House of Assembly Gyang Fulani were also killed on Sunday afternoon while they were going to a mass burial for the victims of Saturday's attacks. An interview with Vatican Radio, Archbishop Kaigama said that the violence against Christian villages around Jos “doesn't seem to stop.”


It was not clear how many of the victims were Christian. However, Mark Lipdo from Christian advocacy group, the Stefanos Foundation, said the reports he received from 13 villages showed they were all Christian. He blamed Muslim herdsmen of the Fulani ethnic group for the attacks, though a leader of the Miyetti Allah Fulani Herdsmen Association denied any involvement by the herdsmen.


Nigeria's Islamist terror group Boko Haram, which has killed numerous Christians in the recent past, is not being suspected in the attacks. However, the group has launched attacks in Jos to reignite sectarian tensions in the city, which has witnessed sporadic clashes between Muslims and Christians for years. In January 2010, over 300 people were killed and in November 2008 over 700 were killed in a week of fighting in and around Jos. Boko Haram wants to create an Islamic State in the Muslim-majority North and rioting helps it to make a case for secession from the Christian-majority South. The terror group, which also targets police and Muslim civilians, has warned that all Christians living in the North should move to the South unless they want to be killed.