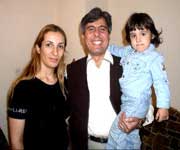 Christian Solidarity Worldwide (CSW) says it is gravely concerned about the health of Pastor Benham Irani, who reportedly lost consciousness three days ago. In a media update, CSW says that although Pastor Irani has now regained consciousness, his health is said to be declining steadily as a result of the harsh treatment he has endured in Karaj's Ghezel Hesar Prison, where he is serving a five-year sentence.

Benham Irani pastors the Church of Iran in Karaj, was arrested in December 2006 and sentenced to six years imprisonment on charges of "action against the state" and "action against the order." CSW reported that the verdict against him includes text that describes Pastor Irani as an apostate and reiterates that apostates "can be killed." Ghezal Hesar is one of Iran's most notorious prisons and, according to CSW's sources; Pastor Irani has been beaten regularly by his cell mates and prison authorities.


CSW stated: "As a result of injuries sustained during these assaults, he has difficulty walking. His health has further deteriorated due to the harsh prison conditions; he has suffered severe bleeding as a result of ulcers and complications with his colon, which led to his recent loss of consciousness. He is also unable to see very well and there are growing concerns that he could die within the next few months. He lost consciousness as a result of his general ill-health, which includes ulcers and complications with his colon. There are reports that Pastor Irani was held in a small cell and psychologically tortured by guards who would repeatedly wake him from sleep. CSW fears that the pastor could die within the next few months.


CSW's Advocacy Director Andrew Johnston called upon the Iranian government to ensure that Pastor Irani receives urgent medical attention and is protected from assault, in accordance with the UN Standard Minimum Rules for the Treatment of Prisoners. "Though the charges against him are couched in political language, in reality Pastor Irani, like so many other Christian prisoners, has been imprisoned solely on account of his faith," he said.