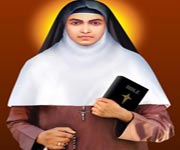 Anna Muttathupadathu was born on August 19, 1910 at Arpookara in Kudamalloor near Kottayam District, Kerala, India. She was the fourth child of Cherian Joseph and Mary Muttathupadathu. Her parents nicknamed her Annakkutty (little Anna). Anna's mother died when she was young, so her maternal aunt raised her. Anna was educated by her great-uncle, Father Joseph Muttathupadathu. When Anna was three years old, she contracted eczema and suffered for over a year. She was baptized on August 27, 1910 at Saint Mary's Church in Kudamaloor under the patronage of Saint Anna. In her early life she had a poor, difficult childhood and experienced loss and suffering early on in life. In 1916, Anna started school in Arpookara. She received her First Communion on November 27, 1917. In 1918, she was transferred to a school in Muttuchira. In 1923, Anna's feet were burnt when she fell into a pit of burning chaff. This accident left her permanently disabled.

Anna joined the Franciscan Clarist Congregation, a religious congregation of the Third Order of St.Francis and later she arrived at the Clarist Convent at Bharananganam, Kottayam District, on Pentecost Sunday 1927. She received the postulant's veil on August 02, 1928. In May 1929 was assigned to teach at Malayalam High School at Vazhappally. Her foster mother died in 1930. Three days later she resumed her studies at Changanacherry, while working as a temporary teacher at a school at Vakakkad.On May 19, 1930, she entered the novitiate of the congregation at Bharananganam and received the religious habit, taking the religious name of Alphonsa of the Immaculate Conception at that time.


On August 11, 1931, she completed the novitiate and took her first vows. Sister Alphonsa took her permanent vows on August 12, 1936. Two days later she returned to Bharananganam from Changanacherry. Sister Alphonsa then taught high school at St.Alphonsa Girl's High School, but was often sick and unable to teach. For most of her years as a Clarist Sister she endured serious illness.

In December 1936, her health falloff and she was cured from her ailments through the intervention of the Blessed Kuriakose Elias Chavara (who was beatified at the same ceremony as she). On June 14, 1939 she was struck by a severe attack of pneumonia, which left her weakened. On October 18, 1940, a thief entered her room in the middle of the night. This traumatic event caused her to suffer amnesia and weakened her again.


Her health continued to deteriorate over a period of months. She received extreme unction on September 29, 1941. The next day it is believed that she regained her memory, though not complete health. Her health improved over the next few years, until in July 1945 she developed a stomach problem that caused vomiting.

She died on July 28, 1946, at the age of 35 years. She was buried at Bharananganam, Travancore (present day Kerala) in the Diocese of Palai. During the last year of her life, she came to know the later-Bishop of Kerala Sebastian Valopilly, a priest at the time, who frequently brought her communion. This bishop became famous in Kerala for championing the cause of poor people from all religious backgrounds who had come to live Thalassery as a result of shortages elsewhere. He was also the person who reported the miracle attributed to St. Alphonsa's intercession.

Hundreds of miraculous cures are claimed for her intervention, many of them involving straightening of clubbed feet, possibly because of her having lived with deformed feet herself. Two of these cases were submitted to the Congregation for the Causes of Saints as proof of her miraculous intervention. The continuing cures are chronicled in the magazine Passion Flower. Claims of her miraculous intervention began almost immediately upon her death and often involved the children of the convent school where she used to teach. The cause for the canonization of Sister Alphonsa began on December 02, 1953 in the Syro-Malabar Catholic Diocese of Palai and she was declared as a Servant of God and declared Venerable on July 09, 1985 by Pope John Paul II.

On December 02, 1953, Eugène-Gabriel-Gervais-Laurent Cardinal Tisserant inaugurated the diocesan process for her beatification. Pope John Paul II formally approved a miracle attributed to her intercession and Alphonsa was declared as Servant of God on July 09 1985. She was then known as Venerable Sister Alphonsa. During the Apostolic Pilgrimage to India of Pope John Paul II, the Pope said as part of his speech at Nehru Stadium, Kottayam, Kerala in South India on February 08, 1986, she was beautified (Blessed) by Pope John Paul II at there.

The miracle that was attributed to her intercession and approved by the Vatican for canonization was the healing of the club foot of a Muslim infant in 1985 in the district of Thalassery of Kerala State.

On July 28th of every year, the death anniversary of Sister, the Bharananganam church celebrates the holy Saint Alphonsa's Feast.

Bharananganam, the Land of Saint Alphonsa

Bharananganam church, one of the famous Christian pilgrim centres is located near Palai on the Kottayam - Erattupetta Road, the town of Bharananganam in Kottayam district. Her tomb in Bharananganam has become a pilgrimage site these days as miracles have been reported by some devotees. The mortal remains of blessed Alphonsa are kept in a chapel next to the St. Mary's Church here. Devotees can also visit Alphonsa museum in the Chapel compound, where hundreds of exhibits associated with the life of Blessed Alphonsa are preserved.

Bharananganam church, one of the famous Christian pilgrim centres is located near Palai on the Kottayam - Erattupetta Road, the town of Bharananganam in Kottayam district. Her tomb in Bharananganam has become a pilgrimage site these days as miracles have been reported by some devotees. The mortal remains of blessed Alphonsa are kept in a chapel next to the St. Mary's Church here. Devotees can also visit Alphonsa museum in the Chapel compound, where hundreds of exhibits associated with the life of Blessed Alphonsa are preserved.

Here is the Quotations and Gold lines of Saint Alphonsa's Biography:-
Grains of wheat, when ground in the mill, turn in to flour. With this flour we make the wafer of the holy Eucharist. Grapes, when crushed in the wine press, yield their juice. This juice turns into wine. Similarly, suffering so crushes us that we turn into better human beings.