UNESCO announces the Church of Nativity as World Heritage Site 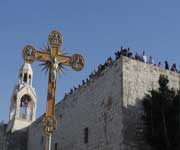 The Church of the Nativity in Bethlehem and the Pilgrimage Route have become the latest World Heritage Sites.

The United Nations Educational, Scientific and Cultural Organization announced the additions on Friday, after the World Heritage Committee meeting in St Petersburg, Russia, voted 13-to-6 in favour. The church is venerated by Christians around the world as the site traditionally believed to be the birthplace of Christ. The site’s listing has angered Israel which sees it as part of efforts by Palestine to assert its claims to statehood.


Hanan Ashrawi, head of the Palestine Liberation Organisation’s Department of Culture and Information said the move was a “welcome recognition by the international community of our historical and cultural rights in this land”. The nomination of the Church of the Nativity was Palestine’s first since being accepted as a UNESCO member eight months ago."
Source www.christiantoday.com