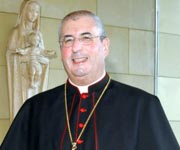 The Roman Catholic Bishop of Paisley Philip Tartaglia has been appointed as the new Archbishop of Glasgow. He takes over from Archbishop Mario Conti, 78, who served in the position for 10 years. He has been a leading opponent of proposals to legalise same-sex marriage in Scotland. Archbishop-designate Tartaglia was ordained in 1975 and become a bishop in 2005. Archbishop Mario Conti welcomed the appointment of Bishop Tartaglia as his successor. Following his appointment by Pope Benedict, Archbishop-designate Tartaglia said: "I am conscious of the historic place of the Archdiocese of Glasgow in the history of Christianity in Scotland and of its importance for the Catholic community in particular".

Paisley Philip Tartaglia said "It is a great honour for me to be appointed Archbishop of my native city and diocese." Tartaglia said he had been "very happy and fulfilled" as Bishop of Paisley. He said: "I have loved my diocese. The priests and people of the Diocese of Paisley will always be in my heart". "I would want to serve the Archdiocese of Glasgow with the same affection and devotion." He added: "I know I can only be a good bishop with help from above, so I ask everyone to pray for me."


Bishop Tartaglia will take up his new role as Archbishop of Glasgow on September 8. Following his retirement, Archbishop Conti will have the title Archbishop Emeritus of Glasgow. The Archdiocese of Glasgow is the largest of Scotland's eight dioceses with an estimated Catholic population of 200,000. It comprises 95 parishes and is served by 203 priests.