Bishops Call for Inquiry into Mine Violence 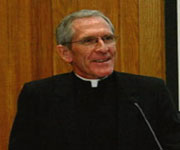 Southern African Catholic Bishops' Conference condemned the killings at platinum mine in Marikana and called for a judicial inquiry into the circumstances that led to the violence. Thirty-four people died and 78 were injured Aug. 16 when police opened fire on striking miners who, armed with machetes and homemade spears, were gathered on a rocky outcrop at the mine, 60 miles northwest of Johannesburg. Another 10 people, including two policemen, had already been killed in violence at the mine since the start of an illegal strike Aug. 10.

"The senseless loss of life, especially through wanton violence, is always a tragedy and needs to be condemned in the strongest terms," the Southern African Catholic Bishops' Conference said in an Aug. 17 statement. "There are a lot of questions and not many answers," Kevin Dowling, Bishop of Roman Catholic Diocese of Rustenburg said in an Aug. 17 telephone interview.


The mine is located in his diocese. He and other church leaders were aware of the standoff between two trade unions over recognition agreements at the mine and "hoped that it would be resolved in the negotiations during the week," Bishop Dowling said. The miners were also demanding higher wages. The actions of the trade unions, the London-based Lonmin mining company and the police "need to be investigated" by an inquiry that also looks at "the living and working conditions at this mining operation," the bishops said.