Buddhist radicals attack Pastor and his wife in Sri Lanka 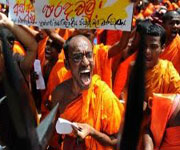 A group of 40 Buddhists attacked a Pastor from the Assembly of God Church and his wife in Deniyaya, Matara District, Southern Sri Lanka on August 09, for allegedly promoting Christianity in the area. Radical Buddhists do not tolerate the presence of Protestant groups and want them expelled from predominantly Buddhist regions. Deniyaya is home to about 500 Christians. The attackers included five Buddhist religious and the local Government Secretary.

According to the National Christian Evangelical Alliance of Sri Lanka (NCEASL), the attackers stopped the pastor and his wife with a jeep and three three-wheelers, acting in total impunity since local police did not intervene. Some eyewitnesses said that among the attackers they recognised the group's leader, Thusitha Ranawaka, who owns a local construction company and is brother-in-law of Mahinda Rajapaksa, President of Sri Lanka. Although present, he simply looked on what was happening.


The NCEASL reported that, in addition to the attack against the Protestant Pastor, another mob of Buddhists harassed a Methodist woman, forcing her to leave the area. In Southern Sri Lanka, radical Buddhists have been engaged in anti-Christian campaign for some years. For them, the Christian minority constitutes a threat to local religious traditions.


In June 2008, more than 7,000 people took to the street in Middeniya (Hambanthota District) in order to expel the Assembly of God Church and its members because they are a menace to "Buddhist integrity". The Jathika Hela Urumaya (National Heritage) Party and the Janatha Vimukthi Peramuna (People's Liberation Front), two extremist parties in the ruling coalition Government, back the anti-Christian campaign. The first is made up of Buddhist monks who support anti-conversion laws; the second is Marxist-oriented.


Christians, Muslims and Hindus have seen their religious freedom curtailed in other parts of the country. On 20 April, about 2,000 Buddhist believers and monks attacked a mosque in Dambulla, in Central Sri Lanka, calling on the Government to tear it down and ban the construction of more non-Buddhist religious buildings.