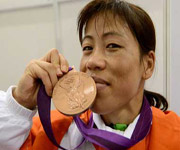 India won six medals in London Olympics; one medal has been bagged by Mary Kom in Boxing. Her performance inspires many others to take keen interest in sports. Six medals in the Olympics this time that does not record the history. After the long struggle, Mangte Chungneijang Mary Kom, also known as Mary Kom, belonging to Kom tribal community of Northeastern State of Manipur won bronze medal in London Olympic in Boxing. She was a five time World Boxing champion and the only woman boxer to have won a medal in each one of the six world championships.

Christian leaders in India greeted Mary Kom for her lifelong achievement by getting medal in London Olympic and all the leaders prayed for her. She is a mother of five-year-old twins, after a twelve-year struggle has been a great success. She stated "Jesus is not only the piety of a woman with an award is unknown to many. The interview will provide the courage won't hesitate to specify the name of Jesus Christ". India Today magazine, when referring to her, "She believes firmly in Jesus Christ and has no hesitation in invoking Him before any bout" she said.


She made an apology to the Indians for not catching the Gold or Silver, but she satisfied in Bronze. "Indian people are proud of the support that I was talking in fantastic and I worked for her best, got to the medal very good. It's a game, in some cases; we expect that everything can be like. However, thanks to Jesus for achieving medal. In my 12 years in the sign of the Olympics. Now I am very happy" she added. She once said in an interview with Radio Australia: "I entered the ring boxing, the first five or ten seconds before you start to dance, I believe in Jesus and pray to my God and my cousin and then start the game as"