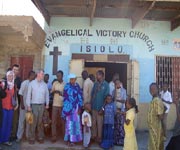 Evangelical Victory Church of Game-Loitiki, a village located 7 kilometers outside of Isiolo, Kenya, was attacked and looted on July 7 by an armed mob believed to be sympathizers of the al Qaeda-linked Somali terrorist network al-Shabab. "At noon, attackers armed with guns stormed the compound and immediately began pulling down one iron sheet after another and soon 60 iron sheets were gone," Pastor Joseph Lokuruku, who helplessly watched the incident from a distance, told ICC. "It was a terrible sight to watch the walls of the church come down, I could not shout for help because the attackers could gun me down."

Joseph Lokuruku, Pastor of Evangelical Victory Church in Isiolo, Kenya and the associate pastor, Boku Yayu, immediately sought the local police for help. "Isiolo police station, we did not get the help we needed because the police had dispatched their officers for other assignments outside the station," said Lokuruku. An officer told Lokuruku they could not offer assistance because there were no armed personnel on duty. Moreover, "darkness was approaching, hence the operation of looking for the attackers had to be carried over to the next day," Lokuruku conceded.


Shocked and dismayed, the church's 60 congregants arrived for worship the next day to find their church building in ruins. "The church members were fearful, but the Holy Spirit encouraged us to endure and to put our trust in God," said Lokuruku. The pastor estimates the cost of repairing the damaged church at 80,000 Kenya shillings (approximately 950 USD).


Church leadership said they had warned local law enforcement that rumors of an attack had been surfacing for days. "On July 6, we met the District Commissioner of Isiolo to register our fears of a possible attack, but no action was taken," said associate pastor Yayu. "One of our [church] members had heard people threatening the church, saying, 'we do not want infidels in this area.'"


The destruction of the church in Game-Loitiki came only one week after al-Shabab militants hurled grenades into the African Inland Church of Garissa, in eastern Kenya, and opened fire on congregants, killing 17 people, including 15 worshippers. Grenades were also thrown at the local Catholic Church. Escalating violence targeting Kenyan churches has Christians concerned that Islamic extremism is on the rise in the East African country.