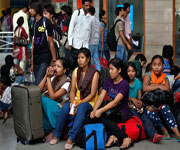 Concerned over the mass migration of people from the Northeast, National Council of Churches in India (NCCI) and Evangelical Fellowship of India (EFI)are calling for calm and urging the civil society and Government to take steps to restore peace and review security for people from the community. The Evangelical Fellowship of India (EFI) while denouncing the violence in Assam also decried the "social media hate campaign" that led to an exodus of young professionals from several cities in recent days. The Government has identified 275 websites and blogs that participated in the online campaign of hatred against people from the Northeast. 125 websites have already been blocked. After threats through online posts and text messages, thousands of people from states like Assam, Manipur and Mizoram boarded special trains to travel back home.

Mass migration of people from the Northeast

"The exodus of young northeast people exposed the fragility of plural society in India. The violence, the internal displacement of about 500,000 people and the hate campaigns by extremist religious and political groups, called for greater vigilance by government agencies. But equally important, the flash points were a pointer to civil society and religious leadership to take urgent measures encouraging understanding, tolerance and dialogue between communities in the country," the evangelical body said in a statement.


Most of the online content started getting posted from July 13 and fake profiles were created for spreading morphed pictures, according to a Home Ministry report. Also, a Pakistan-based hardline group is suspected to have been involved in doctoring images and spreading them across social networking sites like Facebook and Twitter to incite Muslims and create scare among people of northeastern region, according to a PTI report.


EFI urged upon the Central and State Governments and charitable organizations to "identify resources to ameliorate the pain and suffering of the people impacted by the violence and displaced in one of the greatest human tragedies in recent years". Security has been stepped up across Assam which witnessed a spate of clashes between the Bodo Tribal groups and Muslims last month. According to sources, some 77 people have been killed and more than five lakh displaced, mainly from Kokrajhar, Chirang and Dhubri Districts.


"Resettlement, rehabilitation and the rebuilding of lives is a national priority. The Government must investigate the root causes and the friction points that led to the recent violence and ensure acceptable solutions for them," Rev Dr Richard Howell, the General Secretary of EFI said. He also called for suitable legislation on the pattern of the proposed Prevention of Communal and targeted Violence Bill drafted by the National Advisory Council to bring genuine reassurance to religious minorities and the marginalized people in the country.


Meanwhile, in Karnataka alone, up to 30,000 Northeastern people fled the city since late last week driven by fears of attacks. Over 17,000 police personnel were deployed in the capital to instill a sense of confidence. Police say the number of those leaving, which was around 2,000 every day, have dropped to less than 1,000 on Sunday. "It is a tragedy when citizens feel unsafe and insecure in their own democratic country. The NCCI views this situation as a syndrome which would collapse the unity of our country. This mass exile would possibly invite unnecessary and unwanted repercussions on the unity of our nation," the National Council of Churches in India (NCCI) said.


The apex body of the Protestant and Orthodox churches assured the Diaspora communities of northeast India, of its prayerful solidarity, and said it upholds those who are seeking refuge by fleeing back home or by living behind locked doors. The NCCI urged all its member churches and institutions to be hospitable, assure comfort and provide courage and strength to those in need, and campaign against racial profiling and racial discrimination. It also urged the central and state machineries to "play a proactive role in finding solutions for such situations instead of labelling the problem as a 'law and order' issue". Political parties should "come together on one platform, condemn rumour-mongering and assure security to the Diaspora communities of our country," the NCCI said.