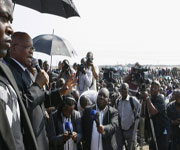 Prayer and memorial services are taking place to remember the people who died amid protests at a mine in South Africa. The prayer service took place at the Lonmin owned platinum mine in Marikana, where 44 people died in a week of protests over pay and conditions. Last Thursday, 34 striking miners died when police opened fire on them. Prior to that, 10 people including two police officers were killed in clashes. A church close to the mine will be holding a memorial service to be attended by miners and politicians, including the head of President Jacob Zuma's office, Collins Chabane. President Zuma has ordered an investigation into the shootings.

The President of the South African Council of Churches and Chairman of the Bench Marks Foundation, Bishop Jo Seoka has been in talks with Lonmin executives and the miners in an effort to resolve the dispute. Lonmin executives agreed to withdraw their threat to fire the miners if they did not end their strike. Bishop Seoka sent an open letter to President Zuma urging an impartial investigation. "The coming investigation into the shootings must commence promptly and consist of an impartial commission that will be able to establish responsibilities for the incident at all levels within the police force and government, and the top management of Lonmin," he said.


The Bench Marks Foundation, which monitors corporate social responsibility and is also chaired by Bishop Seoka, warned that the combination of a lack of education, training and employment may lead to more unrest. It has also raised concerns over the frayed relations between the mines and the local communities in which they are based. Bishop Seoka said: "Communities in the area say that mines' corporate social responsibility programmes are 'lies' as they make a lot of promises when they enter a community but often do not deliver. "The majority of the projects are done to satisfy their public image and rarely do they consult with workers to find out what they actually need."