Churches call for peace in Assam 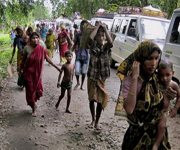 National Council of Churches in India (NCCI) and Catholic Bishops' Conference of India (CBCI) have expressed deep shock and grief over the ongoing communal violence in Assam that has claimed over 40 lives and have forced about 1,70,000 people to flee their homes. The leaders of various churches and Christian denominations met at the Bishop's House in Bongaigaon and resolved to pray for peace and distribute relief to thousands of people who are put up in various relief camps.

The National Council of Churches in India (NCCI), an apex body of the Protestant and Orthodox churches expressed deep concern over the violence in Assam. "This is a repetition of the 2008 carnage in Kokrajhar where 55 people were killed and thousands of people were displaced and still many have not been able go back to their own places. It is very upsetting to see that this unwanted episode is being repeated, displacing people, destroying property, and annihilating human lives," said the NCCI General Secretary, Roger Gaikwad.


The Catholic Bishops' Conference of India (CBCI) lamented that the humanitarian crisis and the mindless violence have shattered the lives of many. "This is deeply pained at the violent clashes taking place in Lower Assam," said CBCI Secretary General, Archbishop Albert D'Souza.


While expressing solidarity with the suffering people, the NCCI also urged both the communities to stop the arson and violence. The NCCI also called upon churches to pray and facilitate peace processes among the people.


Clashes between Bodos Hindu and Muslim minority immigrants began on July 19 after gunmen attacked two student leaders in Magurbari. Prime Minister had earlier announced Rs.300 crore as special assistance for development of the violence-hit areas. He also announced Rs.2 lakh each to kin of those killed in riots.