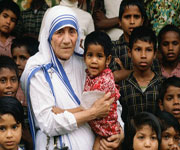 Special prayers were held at the headquarters of the Missionaries of Charity at Kolkata on Sunday on the occasion of the 103rd birth anniversary of Mother Teresa. A mass was held to celebrate the birth anniversary, where nuns from the missionary and other followers of Mother congregated. Superior General of Missionaries of Charity, Sister Prema, said everyone prayed and remembered Mother Teresa for her teaching and sought her continual blessings. She received several national and international awards including the Nobel Peace Prize in 1979 for social service during her lifetime.

"On the August 26, it is the birthday of Mother Teresa. 103 years ago, "God gave Mother Teresa to the world" that the world may know that they are loved and that they are children of God, brothers and sisters of each other. In 1997, 15 years ago God took her from us and we seek her continual blessings in the work and also in the people who are drawn to God through Mother, to see Mother's works and the work which continues," said Sister Prema.


Sister Prema said that they should follow the teachings of Mother and spread the message of love and compassion. "In today's world, Mother, as she did during her life, teaches us that we love one another, especially those in our own families, that we want everyone whom God puts with us, especially the children. Those children who are not yet born and they need the protection of the family that we allow them to be born and grow into human beings full of love for God," said Sister Prema.


She came to India in 1929 at the age of 18 and took up teaching and became an Indian citizen in 1948. Mother Teresa died on September 05, 1997 at the age of 87, and was known for her extraordinary love and dedication to poor, homeless and diseased people. She received several national and international awards including the Bharat Ratna, the Magsaysay Award in 1962, the Pope John XXIII Peace Prize in 1971, the John F Kennedy International Award in 1971 and the Nobel Peace Prize in 1979.for social service during her lifetime.