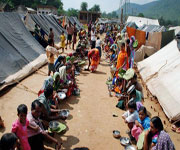 On Sunday, August 26, churches would remember and pray for those who were murdered and wounded for their faith during the Kandhamal massacre in 2008. The Isai Mahasagh in Bhopal, Madhya Pradesh earlier appealed to churches to commemorate the day as "Indian Christian Martyrs Day" to remember the sacrifice made by Christians of Odisha. "The number of people embraced death for the sake of faith is over fifty, so we decided to commemorate this event on the last Sunday of August. It is in the month of August 2008, number of believers faced death and suffering. Every Sunday Christians gather all over the world for prayer so it will be fitting to remember and pray for those Christians," Fr Anand Muttungal, Chief Coordinator of the Isai Mahasangh said.

Fr Anand Muttungal, Chief Coordinator of the Isai Mahasangh also reminded that prayers must also include those Christians who are "living like a monument of faith" facing continued suffering. "The Indian Christian martyrs day is not just to remember and pray for the believers who embraced death but also those Christians who are facing suffering and threat due to their faith in Lord Jesus Christ," he said. The Isai Mahasangh has been organising special prayers on this day along with blood donation camps to remember the sacrifice of the martyrs.


Kandhamal witnessed unprecedented anti-Christian violence after the murder of VHP leader Laxmananda Saraswati and four of his aides in August, 2008. The violence killed more than 90 people and displaced around 50,000 others. Additionally, some 300 churches and 5,600 houses were razed to the ground. 'Kandhamal Nyaya, Shanti o Sadvabana Samaj', a platform of adivasis, dalits, Hindus, Christians, survivors, among others, announced it will observe Kandhamal Day on August 25 at Lohiya Academy, Bhubaneswar


It also decided to hold a symbolic dharana in Bhubaneswar on Sunday in front of the Odisha Assembly to register their discontents before the government and put forth their just demands. "The violence continued for several months uninterruptedly. More than 52,000 people had to run away and hide in forests for weeks, almost 6,000 houses burnt into ashes, more than 300 worship places, schools, hospitals and other institutions destroyed, and perhaps as many as 100 persons, including women and children, were killed in the most horrendous manner," the Samaj recalled in a note.
You can browse more latest Missionaries News Updates Here!!!


It said still people are waiting for justice in-spite of all odds and obstacles - faulty investigations, terrorized victims, frightened/deceived witnesses and unfriendly court environment. "Hundreds of families still have no house. Many of those were forced out of their livelihoods; still they are roaming for an employment. Many children had to drop their studies and become child laborers, and those who could continue studies lost their vigor." After four years, the Samaj declared, time has come to make the civil society, opinion builders, media people, intellectuals, policy makers to look back for once what changes have occurred in the question of justice, peace, compensation, rehabilitation and others.


It is reported that out of 3,300 complaints filed by victims in the local police stations only 831 have been registered as FIRs. The cases registered against the miscreants are being tried in two fast track courts. "Just one person has been convicted of murder, and in other cases, frightened witnesses, bad investigation and shoddy court cases have meant that ringleaders have escaped the law," says John Dayal, a Christian activist and member of the National Integration Council (NIC).


Besides prayer and protest, Christians must observe the fourth anniversary of the worst violence against the Christian community in India through the pursuit of justice, suggests Dayal. "And holding the State – not Orissa or Odisha alone, but the Indian State – to account, learning our Constitutional lessons from developments in Gujarat which saw a near genocide against the Muslim community in 2002, and the violence against Sikhs in Delhi and other cities in 1984," points Dayal. "Instead of a display of charity," says Dayal, "what rebuilding in Kandhamal needed was concerted action to ensure that that the government, through the district administration met the entire expense, rather than give a pro rata amount decided by some bureaucrats."


"It was the government's job, many felt, to ensure reemployment, rebuilding of businesses and local self-help groups which were earlier flourishing in the turmeric and ginger trade. The church relief could then have gone into rebuilding lives," observes the secretary general of the All India Christian Council (AICC). "Charity is easy. The pursuit of justice is not easy. It is time consuming, expensive, and needs a dedicated core team which will not accept defeat. Kandhamal needs such a pursuit of justice."