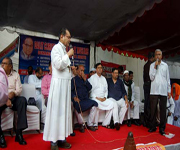 The leaders from the Dalit Christian and Muslim communities today called for mass protests and state-wide campaigns to force the Central government to act on their demands before the 2014 elections. In a show of unity, several hundreds of Dalit Christians and Muslims joined by activists, priests, nuns and church leaders, took out a 'Parliament March' and hold dharna in the capital demanding the restoration of the Schedule Caste rights guaranteed by the Constitution.

Carrying banners and donning T-shirts with the slogan 'UPA - Reply to the Supreme Court', the protesters braved the rains to register their anger against the Government's procrastination despite studies and specially designated panels denouncing the discrimination based on religious affiliation. Para 3 of the Constitution Order 1950 excludes Scheduled Caste origins converted to Christianity and Muslims the right to special rights and protections. The Order was amended for the inclusion of Sikhs and Buddhists in 1956 and 1990 respectively.


Speaking at the dharna, organised by the National Council of Dalit Christians in Jantar Mantar, Delhi, Archbishop of Delhi Vincent Concessao said the discrimination against Dalit Christians and Muslims goes against the Constitution which is secular in nature. "We are to not only to promote what is good, we must also oppose what is evil. Discrimination based on religion is an evil we must fight. It is our duty and our responsibility," said Concessao.