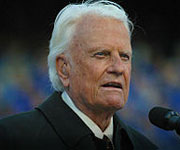 Evangelist Billy Graham remains at Mission Hospital where he is being treated for a bronchitis infection and now he is still in stable condition. Nurses report that Mr.Graham rested well during his first night at Mission Hospital in Asheville and that, as of early Monday, he is up having breakfast and doing fine. "Mr. Graham continues to do well and the infection is responding well to treatment," said Mission Hospital pulmonologist, David Pucci, DO.

Graham spokesman, A. Larry Ross, confirmed that the 93-year-old evangelist Billy Graham watched the closing ceremony of the London Olympics from his bed on Sunday evening. "The ceremony brought back fond memories of various crusades Mr.Graham held in the UK and in Rio de Janeiro, the host city for the next Summer Olympics, over seven decades of public ministry," said Ross.


After being admitted to Mission Hospital early Sunday morning, Mr. Graham spent part of the morning watching his grandson, Will Graham, on television preaching at First Baptist Church of Spartanburg S.C. Later, he enjoyed a visit from his daughter, Gigi and one of his grandchildren. They ate lunch together and enjoyed a relaxing afternoon. No date has been set for discharge, but physicians are hopeful that Mr. Graham will continue his rapid rate of recovery and will be able to return home soon.


Mr. Graham was previously hospitalized for successful treatment of pneumonia in November, 2011. He resumed his ongoing program of physical therapy and normal activity shortly after his release, according to his staff. Staff further report that the 93-year-old evangelist has remained in good overall health the past year, though he continues to remain at home due to age-related conditions.


However, Mr. Graham remains actively involved in ministry and writing projects, including near completion of a manuscript for a new book summarizing his Gospel message over the past seven decades of public ministry.