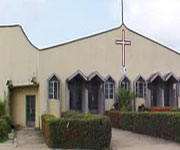 A Group of unidentified gunmen killed at least 19 people and wounded several others, including children, in an attack on Deeper Life Church in Kogi State, in Central Nigeria during an evening service on Monday. Bombings and other kinds of attacks on churches are common in Nigeria, but a local official says this is the first time such an attack has taken place in Kogi, which is further southernmost states previously affected.

Local officials told the BBC that that the gunmen stormed the church near the city of Okene in Kogi state and fired on worshippers. The pastor was among those killed when the assailants fired Kalashnikov assault rifles, the officials added. "It is not clear who carried out the attack but militant Islamist group Boko Haram has carried out numerous raids on churches and other targets in Nigeria," said the BBC story. BBC Nigeria correspondent Will Ross says the shooting happened further Southern most areas affected by Boko Haram violence.


A witness, who asked not to be identified for fear of being targeted, said around 10 gunmen blocked off the exits to the church before shooting the trapped people inside. The authorities are searching for more victims who may have run into the bush nearby, he added. According to NBC News, the group, which is loosely based on Afghanistan's Taliban and wants to establish Islamic law in the country, usually target authority figures and places of worship to settle scores with people they say harmed their members.