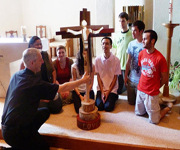 A wooden cross has been specially crafted by the Catholic Church to symbolise its service to others during the Olympics. It was designed and created by artist Jon Cornwall, from the Walsingham House retreat centre in Essex. He used 12 different types of wood to make the cross, symbolising the 12 disciples. The Olympic Cross, specially commissioned for the 2012 London Games, has been blessed by Fr Simon Penhalagan, President of the Sion Community and the cross has been placed at the Joshua Camp, an international gathering of Catholics to coincide with the Olympics.

Speaking of his creation, Cornwall said: "I chose to use 12 different timbers from across the world to create the cross so as to represent the 12 disciples who were commanded to 'go and make disciples of all nations' (Matthew 28:19). The Olympic Cross has the same purpose: while each individual part may be rich with character, the whole is greater than the sum of its parts."


The camp is providing hospitality and organising service projects with the aim of fostering spiritual growth and evangelisation. James Parker, Catholic Executive Coordinator for the 2012 Games, said: "We wanted to create a keepsake that symbolises everything the Games truly represent, something we could then pass on to future Olympic host nations". "As Christians our lives mean nothing without the cross and so this seemed to be the most suitable object to commission for ourselves and as a future gift to others."