September 13, 2012
Jonathan Goforth, (1859-1936) the first Canadian Presbyterian missionary to China with the Canadian Presbyterian Mission, with his wife, Rosalind Goforth. He was the China's Greatest Evangelist and was one of the greatest foreign missionaries of his era. He became the foremost missionary revivalist in early 20th century China and helped to establish revivalism as a major element in Protestant China missions. He felt God's call to serve in China after hearing Oxford County native George Leslie Mackay, a pioneer Presbyterian missionary to Taiwan, speak; he claimed to sense a call from God to go to China. He married Rosalind Bell Smith. His wife, Rosalind Goforth, was the author of How I Know God Answers Prayer (1921), her husband's biography, Goforth of China (1937) and Climbing: Memoirs of a Missionary's Wife (1940). They served in China for the next 46 years. 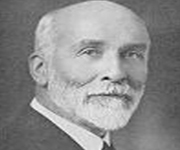 He was born on February 10, 1859 in Oxford County, Ontario, Canada. He grew up in the childhood on an Oxford County, Ontario farm, the seventh of eleven children. His parents, Francis Goforth and Jane Bates had immigrated there, after their marriage, from England. His devout mother influenced him to pray and to love, read and memorize the Scriptures. Something of the hardships endured by the family was indicated by the fact that the father once went to Hamilton for food and walked through the bush all the way back, a distance of seventy miles, with a sack of flour on his back. By diligent effort Jonathan managed to keep up with his class in school, although he was under the handicap of being obliged to work on the farm each year from April to October.
Jonathan's mother made him start reading the Psalms at age five. Soon, he memorized so much no one would listen to him recite it. As a young boy, Jonathan was constantly reading the Bible and had a longing to learn more about God and be one of his children, but it was not until he was eighteen when he finally committed his life to Christ. He taught school in Thamesford, Ontario.

Jonathan had the dream of becoming an accomplished lawyer and politician. He would often practice speeches behind his house and have heated discussions with himself. Until the day when his father-in-law gave him a book to read: The Memoirs of Robert Murray M'Cheyne. This drastically changed his life for through this book God revealed His calling for Jonathan, to become a minister. Since that day he became incredibly involved in his church. He taught a Sunday school class and handed out tracks at the door, but he was still unsatisfied and started a Sunday night church service in the rickety, old schoolhouse. He even started family worship every night in his home, which eventually led to his father's salvation. It was not until later when he heard G. L. MacKay preach and give an invitation to become a missionary, did he decide to serve the Lord in China.

He attended University of Toronto and Knox College, where he graduated in 1887. While attending college, he did rescue mission work. He read Hudson Taylor's book about missionary work in China, and it so moved him that he dedicated his life to the Lord as a missionary. He was awarded the Doctor of Divinity in 1915 and ordained. During his training, Goforth met Rosalind Bell-Smith at the Toronto Union Mission.

Rosalind Bell-Smith was born in 1864 at London, England and moved with her parents to Montreal, Canada, three years later. Her Dad was an artist and Rosalind graduated from the Toronto School of Art in 1885. In 1887 she married Jonathan Goforth and her married name Rosalind Jonathan. They had eleven children (Gertrude, Donald, Paul, Florence, Helen, Grace, Ruth, William, [Amelia] Constance, Mary, and [John] Frederick), five of whom died as babies or very young children. She was the author of How I Know God Answers Prayer, Goforth of China, which was her husband's biography and Climbing: Memories of a Missionary's Wife.

Goforth was greatly supported by his classmates to become an overseas missionary. He had also read the book by Hudson Taylor: China's Spiritual Need and Claims, a book that he ordered many copies of and mailed them to many pastors that he knew to promote missionary work in China. The Goforths were sent to pioneer the North Henan mission in 1888. Their work was difficult and they lost five of eleven children to sickness. In 1900, the Goforths had to flee for many miles across China during the Boxer Rebellion. Jonathan was attacked and injured with a sword, but they both survived and escaped to the safety of one of the "Treaty Ports", though suffering severe wounds.

The Goforths returned to Canada for a year. After their returned to Henan in China in 1901 with a new ministry focus, itinerant evangelism, Jonathan Goforth felt increasingly restless. In 1904 and 1905 he was inspired by news of the great Welsh revival and read Charles Finney's "Lectures on Revivals". In 1907, circumstances brought him to witness firsthand the stirring Korean revival. As he returned to China through Manchuria, congregations invited him back in early 1908. During this extended visit there occurred the unprecedented "Manchurian revival". It was the first such revival to gain nationwide publicity in China as well as international repute. The revival transformed Goforth's life and ministry; from then on he was primarily an evangelist and revivalist, not a settled missionary. He also became one of the best known of all China missionaries, admired by many, but criticized by some for "emotionalism."

He became convinced that his call was to revivalism and began the ministry that would bring the greatest immediate response of any missionary work in China. Goforth's new work as a revivalist started in 1908 in the northeast, and in the next five years more than 13,000 came to Christ in China through his preaching, which focused on the need for prayer, confession, repentance and reconciliation. By the 1920s, so-called modernism had begun to sap the vitality of many mainstream denominations in the west. Goforth heard himself criticized for his "fundamentalist" preaching on the reality of hell and judgment. He persevered, often preaching eight hours a day, sometimes to crowds numbering 25,000.

In 1925, he decided to remain within the Presbyterian Church in Canada (PCC) and his Henan station was transferred to the support of the United Church of Canada. He and his wife Rosalind, despite their age and fragilities, were then sent by the PCC to begin work in Manchuria, where they remained until his eyesight failed in 1935. Goforth remained active into the 1930s, especially in Manchuria; in 1931 the Goforths coauthored "Miracle Lives of China".

His last days and death

By the time, he and his wife left China in 1934, Jonathan was blind and he died less than two years later. In style and substance, he had blazed the way for John Sung, whose ministry as China's great revivalist was just beginning. Their final years in Canada were spent recounting their stories to many congregations. He died at his son's manse on October 08, 1936, at the age of 77 years, at Wallaceburg, Ontario, after preaching the previous evening in nearby Wyoming, Ontario. The funeral service was held in Toronto's Knox Church and he was buried in the Mount Pleasant Cemetery in the same city.

God used Goforth to bring revival to the Chinese Church, but his ministry did not start that way. Prior to 1906, Goforth worked in Northern Henan as an evangelist and church planter. He and Rosalind practiced "open house evangelism," offering tours of their "foreign devil" home to as many as 2,000 Chinese a day and preaching the gospel to all. Jonathan nearly lost his life in 1900 when he was severely injured by Boxers armed with swords.

During his 46 years on the mission field, Jonathan Goforth set up 31 mission stations, trained 61 native Chinese pastors and brought to Christ 13,000 Chinese people. One of the most well-known of China's missionaries, Goforth was admired by many, but disliked by some for his "emotionalism". Despite poor health, he remained active well into the 1930s, especially in Manchuria.

He and his wife labored in Honan, China, training hundreds of Chinese pastors and evangelists. His wife Rosalind Goforth was the author of "How I Know God Answers Prayer" (1921) the Personal Testimony of One Lifetime, her husband's biography, "Goforth of China" (1937). After Jonathan's death in Toronto, Rosalind, a capable writer who had first published her own autobiography, "Climbing: Memories of a Missionary's Wife" (1940). Their final years in Canada were spent recounting their stories to many congregations.

All the resources of the Godhead are at our disposal!
Put the very best construction on the actions of others
Seek to give much -- expect nothing
Seek each day to do or say something to further Christianity among the heathen
In all things seek to know God's Will and when known obey at any cost.
Never let a day pass without at least a quarter of an hour spent in the study of the Bible.