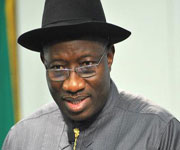 Boko Haram is demanding that Nigeria's Christian President convert to Islam or resign, a stance that again calls into question the Obama administration's playing down of religion as the primary motivation for the radical group. In an online video clip released over the weekend, Abubakar Shekau, leader of Boko Haram told President Goodluck Jonathan to "repent and forsake Christianity." The News Agency of Nigeria said Shekau, speaking in Hausa, said the president should convert or resign if he wanted Boko Haram to end its violent campaign.

Boko Haram, is a violent jihadist terrorist organization based in the northeast of Nigeria, demanded President Goodluck Jonathan to "repent and forsake Christianity. Presidential spokesman Reuben Abati dismissed the demand as attempted "blackmail." "When Nigerians voted overwhelmingly for President Jonathan in the 2011 general election, they knew they were voting for a Christian," he told reporters in the federal capital, Abuja.


"He has the mandate of Nigerians to serve his fatherland. Nobody should imagine that he will succumb to blackmail." "As president, Jonathan is the leader of both Muslims and Christians. It amounts to sheer blackmail for any individual or group to ask the president ... to convert to Islam," Abati added.


Inviting an enemy to convert to Islam or face the consequences is a longstanding tradition in Islam, modeled on the example set by the religion's seventh century prophet. But the reporter goes on to say that on Sunday, Jonathan's spokesman Reuben Abati dismissed the call.