Nuns Pray for Peace in Assam 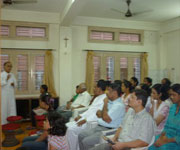 The Daughters of St. Paul in Guwahati Saturday invited their neighbors to pray for peace as the Assam violence saw no letup even after a month. In a fresh outbreak of violence on August 25, unidentified people killed five people who were going to their village from a relief camp in Chirag district, one of the four districts of the Bodoland. One person is reportedly missing. The death toll in the clashes between indigenous Bodo tribesman and Muslim settlers since July 20 has gone up to 86. Some 500,000 people are now living in relief camps.

Following the killing, the administration imposed curfew throughout the region, said Promod Boro, president of the Assam Bodo Students Union. The Government and NGOs are working round the clock to bring normalcy in the strife-torn region apparently without much success, he added. "It is in this desperate and hopeless situation that we called our neighbors for an inter-religious prayer service," said Sr. Philo Joseph, superior of the local convent of the Daughters of St. Paul.


Some 50 people from various religions attended the program at Guwahati, commercial capital of Assam, some 150 km east of the violence-hit region. Sr. Joseph reminded the gathering that they have the responsibility to foster peace in their neighborhood. "We have everything: money, intelligence, enthusiasm: but it is only to be used for the building up of our society, maintaining the existing peace in our society," she added.


Speaking on the occasion, Retired Archbishop Thomas Menamparampil of Guwahati said even the perpetrators of violence might be yearning for peace. "If we talk to them personally they will confess that they want peace," said the Salesian prelate, who has spent decades trying to reconcile warring groups in northeastern India. "When the wish for peace is combined with prayer, it becomes very powerful," he added.


He said people who indulge in violence would ultimately turn to people who work for peace. "We can evoke a sense of peace even in the hearts of those who are the cause of destruction. This is a deeper level of reaching out in peace," he explained. He urged the gathering comprising people from various ethnic groups that they have to become "a spiritual force" for the unity in Assam. "All of us, especially the youth, are looking for peace and prosperity in Assam, in India, in the world," he added.


While Mallika Bhattacharya, a doctor working in a Government hospital, said the prayer meeting helped the participants express solidarity with the suffering people. Deepika Baruah, a schoolteacher, said such programs are "very important at this time in our state."