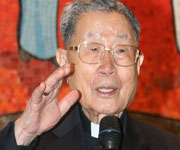 Pope Benedict XVI remembered the service Card Paul Shan Kuo-hsi, SJ, who passed away yesterday, dedicated to the Church as Bishop and President of the Regional Conference of Chinese Bishops. In his message, the pope expressed his closeness to Mgr Peter Liu Cheng-Chung, Bishop of Kaohsiung, Taiwan and the late prelate's successor in Kaohsiung and to "clergy, religious and lay faithful of those dioceses and indeed the entire church in Taiwan". To them, he gave assurance of his prayers for the "priestly soul" of the dearly departed.

Card Paul Shan Kuo-hsi was born on December 03, 1923 in Puyang, Hopeh (Taming Diocese), in mainland China. He entered the Society of Jesus on September 11, 1946 in Beijing and was ordained a priest on March 18, 1955 in Baguio, in the Philippines. He was appointed Director of the Chinese Section of Sacred Heart School in Cebu City in the Philippines and worked there from 1957-59. From 1959-61, he undertook studies for a doctorate in spiritual theology at the Pontifical Gregorian University in Rome.


After spending some time in Vietnam, he was named Episcopal Vicar of Taipei in 1976. He was appointed Bishop of the Diocese of Hwalien on November 15, 1979. In 1983, he was elected Episcopal organiser of the celebrations for the 400th Anniversary of the arrival of Father Matteo Ricci in China. On March 04, 1991, he was nominated as the Bishop of Kaohsiung. He also took on various tasks for the Federation of Asian Bishops' Conferences (FABC), such as President of the FABC Office for Interreligious Dialogue (1983-1985) and for the Holy See. He was also general relator to the special assembly for Asia of the Synod of Bishops held in Rome between 19 April and 14 May 1998. John Paul II made him a cardinal that same year.