Pope says Christ's life was one of sacrifice, not popularity 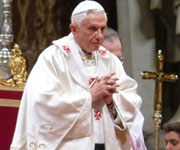 Pope Benedict XVI said that Jesus did not seek recognition during his public ministry but chose instead to preach the sometimes difficult truth of "his sacrifice of love." "Jesus was not a Messiah who aspired to an earthly throne," Pope said during his Sunday Angelus address at Castel Gandoflo Aug. 19. "He did not seek popularity to conquer Jerusalem, and indeed, he desired to go to the Holy City to share the fate of the prophets: to give his life for God and the people." Pope Benedict made his remarks from today's gospel of St. John in which Jesus reveals to the multitude in Capernaum that he is "the living bread which came down from heaven," and that "if any one eats of this bread, he will live forever."

The crowds – who had previously been enthused by the miracle of the multiplication of the loaves and fishes – are now dismayed as Christ clarifies that this bread that he "shall give for the life of the world" is, in fact, his "flesh." "How can this man give us his flesh to eat?" many protested, according the gospel.


The realization had sunk in, noted the Pope, that the "loaves, broken for thousands of people, would not result in a triumphal march, but predict the sacrifice of the cross, when Jesus became the bread broken for the multitude, the body and blood offered in atonement for the soul of the world." Pope Benedict said Jesus knew exactly what he was doing in addressing the crowd "to break their illusions and, especially, force his disciples to decide."


The result was that Christ's words did "dampen enthusiasm and cause many disagreements" among his disciplines such that "many of them no longer followed him." Jesus wanted to make clear that "he was sent to offer his life" and that "those who wanted to follow him had to join him in a deep and personal way, participating in his sacrifice of love." Hence he subsequently establishes the Sacrament of the Eucharist at the Last Supper so "that his disciples may have in themselves his charity and, as one body united to him, extend in the world his mystery of salvation."


The Pope concluded by leading pilgrims in the praying of the midday Marian prayer before expressing some specific words of encouragement to English speaking pilgrims. "May we always hunger for the gift of his presence in the Eucharistic sacrifice, wherein Jesus gives us his very self as food and drink to sustain us on our pilgrim journey to the Father. God bless all of you!