Pope urges laypeople to share Gospel with a world in darkness 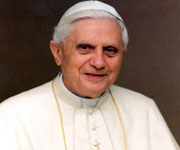 Pope Benedict XVI told a group of lay people this week that the world needs their courageous and credible testimony to bring the hope of the Gospel to all areas of society. In a message sent to the International Forum of Catholic Action in Iasi, Romania, the Pope reflected on the laity's responsibility to the Church and society, reported Vatican daily L'Osservatore Romano. "Co-responsibility demands a change in mentality, in particularly, about the role of the laity in the Church, who are considered not as 'collaborators' with the clergy, but as persons truly 'co-responsible' for being and acting of the Church," he said.

The world needs a mature and committed laity, which can make its own specific contribution to the ecclesial mission with respect for the ministries and tasks that each one has in the life of the Church and always in cordial communion with the bishops. The laity's role is of fundamental importance, especially in this phase of history, the Pope Benedict XVI stressed, to be interpreted "in the light of the Church's social Magisterium."


Lay men and women should also aim to "grow, with the whole Church," he noted, "in the co-responsibility of offering humanity a future of hope and with the courage to formulate demanding proposals." Recalling the "long and fruitful history" of Catholic laity as "courageous witnesses of Christ," the Pope invited the participants in the Forum to renew their commitment "to walking on the way of holiness, keeping up an intense life of prayer, encouraging and respecting personal ways of faith."