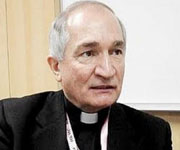 The G20 was under growing pressure to call an emergency summit on global food prices last night as the Vatican accused grain speculators of "hampering the poorest and neediest". The worst drought in 50 years in the United States and poor harvests in Central Asia have raised fears of global food riots, and led to increased scrutiny of commodities traders who profit by exploiting volatile prices. South Korea's president Lee Myung-bak also wrote to G20 members calling for joint action to stabilise grain prices, warning that the soaring cost of food "threatened the survival of the poor and vulnerable of developing countries". The International Grains Council warned that the world's maize stocks were on course to hit a nine-year low, with Russia's wheat crop falling to levels last seen during the major drought of 2010.

The United Nations and key member states are now urging the presidency of the G20, held by Mexico, to schedule a mini-conference on the global food price crisis before the end of the year. The organisation could summon its Rapid Response Forum, which was created at the G20 summit in Paris last year to prevent market crises.


International aid agencies are urging the G20 to implement an already agreed "road map" that they believe would help curb the negative influence of agricultural commodity markets. Yesterday the Vatican's permanent observer at the UN in Geneva, Archbishop Silvano Tomasi, claimed "market activities" such as arbitrage [buying and selling goods to exploit price differences] and the use of derivatives trading in grain supply chains, are "hampering the poorest and the neediest".


In a Vatican Radio interview, Archbishop Tomasi said that the worsening crisis in food price volatility "will have social consequences". The archbishop said: "Poor countries require not only urgent help, but also investment to change the realities of life and make them more human." The moral pressure from the Vatican on the G20 follows widespread condemnation of giant commodities trading companies for regarding drought and allied global food insecurity as profitable business opportunities.


The comment made this week by Glencore's director of agriculture products, Chris Mahoney, that "high prices, lots of volatility, a lot of dislocation, tightness and a lot of arbitrage opportunities" made a "good" environment for Glencore, prompted the UN and leading aid agencies to call for fast-track reform of the international regulations. However, Glencore insisted that it is fulfilling global demand by getting commodities to the places that need them most.