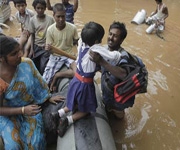 The states have experienced heavy monsoon rains for nearly three weeks, causing rivers to burst their banks. Dozens have been killed and 700 villages submerged in the worst flooding to hit the area in three decades. Christian relief agencies are rushing aid to tens of thousands affected by floods in Assam and it now fears the outbreak of waterborne diseases. The floods have been caused by heavy monsoon rains which led to the Brahmaputra River and its tributaries to break their banks. Reports said at least 19 of Assam's 27 districts have been hit by floods over the past week. The incessant rains have also hampered relief and rescue operations by the Army and paramilitary troops.

"Flooding has added to the already existing human agony caused by the on-going ethnic conflict situation in Assam which has forced communities to flee to relief camps across the state," said Christian Aid's Regional Emergency Manager for South Asia, Ram Kishan. The flood survivors are struggling to get access to food, water and shelter. People have to walk or travel in boats to access safe drinking water.


Christian Aid is presently responding to the floods in the two worst affected districts in Assam - the Dhemaji and Lakhimpur districts. The United Kingdom -based agency has released £50,000 to help meet immediate fresh water, sanitation and hygiene needs in 131 flood-affected villages in the Dhemaji and Lakhimpur districts. The aid is being distributed by two Christian Aid partners in the region, Rural Volunteers Centre (RVC) and Sustainable Environment and Ecological Development (SEEDS).


In a release, the relief agency expressed that the flooding has added to the already existing "human agony" caused by the ongoing ethnic conflict situation which has forced communities to flee to relief camps across the state. "Christian Aid is providing humanitarian assistance to people affected by the conflict through local partner Church's Auxiliary for Social Action (CASA), reaching out to 1,500 families from the 25 worst affected villages now residing in relief camps. Some £30,000 has been released to provide food, water, sanitation support and essential non-food items," informed the Emergency Manager for South Asia, Ram Kishan.


Meanwhile, a total of 166 relief camps have been set up across Assam for flood-affected people. Approximately 1,972 villages in 16 districts have been reported submerged. Prime Minister Manmohan has expressed concern over the flood situation and assured the state government of all help in the rescue and relief operations.