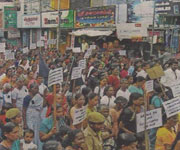 Black flags were hoisted in as many as 150 churches including Nagercoil, Arumanai, Manjalumoodu, Melpuram, Chitharal, Karode, Kuttaicode and Melparai on Sunday in protest against the murder of Edwin Raj (29) of Nadaicavu, near Nithravilai on August 26, 2012. The Nithravilai police have registered cases against seven persons including the district president of BJP, C.Dharmaraj. Moreover the police have arrested five persons in this connection so far. However various Christian organisations at a meeting held recently, Bishop Devakadatshiyam decided to hoist black flags and organise peace processions in different parts of the district. Special prayers also held in all churches on that day.

Special prayers held in all churches and the black flogs were hoisted at many Christian Churches, over Kaniyakumari District in protest against the murder of Edwin Raj of Nadaicavu. It may be noted that condemning the inclusion of the district president of BJP in the FIR filed in the murder of Edwin Raj, who was killed in a communal clash at Nadaicavu, the BJP cadres staged a road roko in different parts of the district recently and the police arrested 751 BJP cadres including the State President, Pon.Radhakrishnan.


However, members of the United Christian Peravai organised peace processions at Marthandam, Vetturnimadam, Puthalam, Thuckalay, Arumanai, Kulasekaram, Karungal and Nadaicavu under the head of Moderator of Church of South India and Bishop of CSI Kanyakumari Diocese, Most Rev.G.Devakadashiyam.