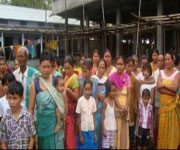 A group of leaders representing the All India Milli Council (AIMC), National Council of Churches in India (NCCI) and the Catholic Bishops' Conference of India (CBCI) on Saturday met at the Church of North India headquarters, New Delhi to chalk out measures for the restoration of peace and normalcy in the aftermath of violence in Assam. In the brainstorming that ensued, the members opined that the problem in Assam should not be seen as a clash between the Bodos or Muslims but as a humanitarian crisis and a national issue that could eventually damage the secular fabric of the country.

They also took note that the riots in Assam in the preceding decades had forced not less than a hundred thousand people to live in camps till date. "Realising the complexity of the problem and the need for a lasting solution that will ensure peace and harmony among the people concerned, the members decided to convene an inclusive meeting of representatives of stakeholders and well-wishers on September 22 in Delhi," said Samuel Jayakumar, Secretary of the Commission on Policy, Governance and Public Witness, NCCI.


Violence between the Bodos and Bengali speaking Muslim settlers that broke out in Kokrajhar, Chirang and Dhubri districts since July 19 have so far killed 95 people and displaced over four lakh. The displaced people will reportedly be rehabilitated in two phases. In the first leg, only those who possess land ownership documents in the Bodoland Territorial Area Districts (BTAD) will be resettled. "The fate of the rest will be decided after the completion of the first phase of rehabilitation," Assam revenue minister Prithwi Manjhi told reporters.


Meanwhile, the leaders of both the Muslim and Bodo communities met at the Bishop's House in Bongaigaon and made an earnest appeal to the concerned people to live in brotherhood. The meeting, facilitated by the Joint Peace Mission Team (JPMT) and the Inter Church Peace Mission (ICPM), concluded with an appeal signed by Prof Samsul Haque, President, Gossaigaon Minority Welfare Committee, Archbishop Thomas Menamparampil, JPMT chairman and Bishop Nityanand Borgoyary, ICPM chairman.


The meeting resolved "to encourage confidence building gestures to re-establish relationship between the estranged communities by giving assistance at the camps, organizing peace programmes and creating an atmosphere of welcome in the villages." Assam Chief Minister Tarun Gogoi has said that the ethnic situation in the state was one of the worst crises for his 11-year-old government. According to reports, there are some 211,194 Bengali-speaking Muslims in various relief camps. The number of displaced Bodos is about 24,000.