Churches Grow in Iran despite the Persecution 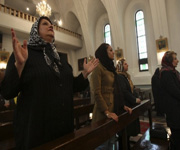 The report said, churches continue their ministry in a climate of fear and Christian converts are prosecuted and harassed. Welcoming Nadarkhani's release, Ahmad Shaheed and Heiner Bielefeldt, U.N. Special Rapporteurs, called on Islamic Republic officials "to calm the situation for churches, especially house churches and allow them to carry out their activities." In this report they also pleaded with Iranian officials to observe the rights of other religious minorities, including Baha'is and Dervishes.

Christians were arrested in Iran

Based on his contacts, interviews and documents, Mr. Shaheed said, "Since 2010, three hundred Christians have been arrested and imprisoned arbitrarily". Mr. Shaheed stressed that these arrests have occurred while the Iranian constitution recognizes Christianity and the right of Christians to practice their faith. Iran has also signed international conventions that require signatory countries to honor the rights of religious minorities.


The Special Rapporteur on Human Rights in Iran stated that 41 arrested Christians had remained in prison from one month to more than a year [before being released] and many more are still being held in custody. He added that churches are pressured to send a list of their congregation to authorities. Heiner Bielefeldt, U.N. Special Rapporteur on Freedom of Religion, also said, "Christians' right to freedom of religion was protected under Iranian law and should be granted in practice."


On the other hand, the Islamic regime of Iran takes advantage of every opportunity to arbitrarily accuse Christian converts of charges like "threatening national security" and "actions against the regime". Source: Mohabat News