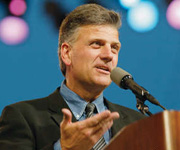 Franklin Graham has called on Christians to be faithful in preaching the Gospel message as he visited the United Kingdom to launch this year's Operation Christmas Child. "Secularism has conquered much of Europe and the West and it came in overnight," he told reporters. "As evangelicals and Christians we need to be more outspoken than we've ever been about our faith and not be ashamed." Operation Christmas Child is an annual Christmas initiative coordinated by Samaritan's Purse. This year, the charity is aiming to deliver 8 million shoe boxes filled with Christmas gifts for children in impoverished communities around the world, including parts of Europe.

The shoe boxes are accompanied by child-friendly literature explaining the meaning of Christmas. Children who express an interest in finding out more about Christianity are then able to take part in a discipleship programme called "The Greatest Journey". "We want to make this an evangelistic effort," said Mr Graham, Samaritan's Purse President. "We wanted to give a gift in Jesus's name and make Christ known as we give out the boxes. That has become our goal now: to make Christ known."


Mr Graham said some schools in the UK had dropped out of the project because they were upset about the Christian faith being shared with children receiving the boxes. However, he said: "I don't apologise for sharing Christ. This is who we are. This is what we do." Shoe boxes are filled with all kinds of gifts, from pencils and paper, to clothes and toys. They are collected at churches and participating schools, and are checked by thousands of volunteers before being dispatched to over a hundred countries where they are then distributed by partner churches. Samaritan's Purse is dialoguing with partner churches in Aleppo and Damascus in Syria to bring boxes to children affected by the ongoing conflict.


Mr Graham encouraged everyone giving a box to say a prayer for the child receiving it. "For many of these children, it's the first gift they've had in their lives. They've never had a gift." Samaritan's Purse is working in some 100 countries providing aid to victims of war, natural disaster, famine, disease and poverty. In the United Kingdom over 5,500 Churches, 7,000 Schools and 3,000 Workplaces take part every year. The deadline for dropping off shoe boxes this year is 18 November.