September 13, 2012
Hermann Friedrich Mogling (1811–1881), also spelt Herrmann Friedrich Moegling, was a German Missionary from Basel Mission who spent most of his career in the western regions of the state of Karnataka, India. He was credited to be the publisher of the first ever newspaper in the Kannada language called as Mangalooru Samachara in 1843. He was father of Kannada journalism and the first person to compile an English-Kannada dictionary (Kettle) and he played a key role in preserving several classical texts in Kannada. He also translated Kannada literature into German. He was the founder and the first principal of BEM Theological Seminary. He was awarded a doctorate for his literary work in Kannada called as Bibliotheca Carnataca. 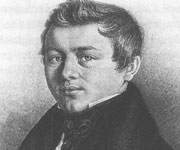 Hermann Mogling was born on May 29, 1811 in the town of Brackenheim, Guglingen, Wurttemberg, Germany. He completed his early education at his home town and studied theology in the Eberhard Karls University of Tubingen and joined the Basel Mission. He announced himself as a Missionary to India and came to Mangalore in Karnataka, India, as a missionary of Basel Mission in 1836.

Hermann Mogling being a Christian Missionary, who was involved in missionary related work in Mangalore but he also learnt the native Kannada language and contributed significantly to Kannada literature. In the days of Mogling's career at Mangalore, there was no simple way of communicating news and other items to the general public because of non-existence of a medium like radio and newspaper in the native language.

In his times, not much communication used to happen between the North and South regions of present-day Karnataka though the people in these two regions spoke the same language, Kannada. He decided to publish a Kannada newspaper with the intention of spreading news items to the public and named it as Mangalooru Samachara (Mangalore News) and its first issue rolled out on July 01, 1843. Thereafter it was published fortnightly and which was contained 4 pages. The paper was printed using stone slabs. Some of the news items covered local Mangalore-related news, Indian population, news related to the East India Company and its laws and regulations, songs of Purandaradasa and moral stories were also printed.

One of his converts by name Anandaraya Kaundinya and his family have exchanged letters with him, which he has published under the title Iraaru patragalu (Twelve letters). This was the first collection of letters ever published in Kannada. Even during his stay in Kodagu district during the years (1853–1858) he spent lot of his time on evangelization and he also published a German book titled Das Kurgland which mainly deals with his activities related to Christianity.


In 1848, Mogling started dealing with Kannada literature by publishing more than 3000 Kannada proverbs. He also composed 20 poems, along with Gottfried Weigle who was his cousin brother and a fellow of Basel Missionary, in modern Kannada poetical form. This made him a pioneer of modern Kannada poetry. But his most important contribution to the Kannada literature is regarded as a Bibliotheca Carnataca, a six-volume collection of traditional Kannada literary texts, including the songs of Basavanna, an early Lingayat poet; Bibliotheca Carnataca a collection of Kannada classics was edited and published by him between the periods of 1848-1853. Mogling was helped in this venture by a philanthropist, J Casamajor who was a retired judge from Chennai and settled at Nilgiris, Tamilnadu, India.

With an exchange of letters, the both discussed on ways to collect Kannada manuscripts, select the important ones among them for publishing and identifying skilled people who would be needed to complete this activity. Casamajor agreed to bear all the expenses required for this venture and was very particular that his name should not be mentioned in any of the publications. A total of eight titles were brought out. The largest published title running 760 pages was the Basava Purana and the smallest one was Kanakadasa's Haribhaktasara. Other titles published as a part of Bibliotheca Carnataca were Dasara Padagalu (a collection of 170 Haridasa songs) and Lakshmisha's Jaimini Bharata. This venture met an abrupt end due to the sudden demise of Casamajor and Mogling's return to Germany.

During his stay in Kodagu, Mogling also published the German book titled "Das Kurgland" and also a Kannada book titled "Raajendranaame" at the behest of the Kodagu King, Senior Virarajendra. The whole book Raajendraname was printed using a simpler orthographic form invented by Mogling himself. The Kannada language uses double consonants frequently, which Mogling felt was difficult for children to learn easily and also to print. Mogling devised a scheme of accommodating the double consonant in the same single line by breaking the double consonant into a half consonant wherever possible. After getting an approval for his scheme from the Madras Province's Education Department, Mogling published this entire book in his devised orthography. He also published a book called "Coorg Memoirs" which was supposedly one of the earliest history books on Karnataka. In this book, he has described the social life of Kodavas and their customs as well. Pilgrim's Progress was published in Kannada by Mogling and Weigle in 1848.

Meanwhile, his cousin brother Gottfried Weigle, who was also a Basel Missionary died in 1855, leaving behind his wife Pauline and four children. At the age of 45 years, Mogling married Weigle's wife Pauline. He and his wife Pauline laid the foundations for the Evangelical parish and Anandapur, a village made out of jungle in the interior of Karnataka. One last contribution to Kannada from him was his interest in coming up with a Kannada-English dictionary. He motivated the British in this project and also suggested the name of Ferdinand Kittel as the ideal person to head the project.

On his return to Germany, he translated 24 songs of Kanakadasa and Purandaradasa to the German language which were published by Zeitschrift der Deutschen Morgenlandischen Gesellschaft, an Oriental society in Germany. In 1870, he also translated the first two chapters (67 verses) of Bibliotheca Carnataca's Jaimini Bharata into German. Mogling died in 1881 at Esslingen, Baden-Wurttemberg, Germany and his memorial is in Esslingen.

At the recommendation of Rudolph Roth, a reputed Indologist, Mogling's alma mater; the Eberhard Karls University of Tubingen awarded Mogling an honorary doctorate in 1858 for his work, Bibliotheca Carnataca. The Mogling Institute of German Language which is in Mangalore and affiliated to Mangalore University is named after him. On July 01 of every year is celebrated as Kannada Press Day (Journalism Day) in Karnataka. In the decades, he was not only involved in missionary work, but also worked zealously for Kannada literature, something which was highlighted recently in a seminar organised by the Hampi Kannada University at the Karnataka Theological College, Mangalore. Kannada journalism was ushered in with the publication of Mangalore Samachara in 1843.


You can visit Jonathan Goforth Missionary to China
Missionary Biography