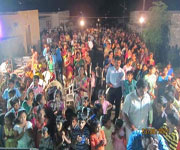 Pastor Raju, 35, is in charge of Grace Church at Kelaginahatti, Annayakana Halli, near Arasikere in Hassan District of Karnataka. He has a congregation of about 80 believers and he lives with his wife, Pushpa, (30) and two young children, a boy (5) and a girl (3). He has been doing his ministry during the last 4 years in a number of places in the surrounding villages. On Tuesday afternoon, 18-9-12, Pastor Raju organized a prayer meeting for the sick patient, mainly for the HIV patients and the blind people at Kelaginahatti and the meeting was being attended by about 200 people. Preparations for serving dinner to the participants at the end of the prayer meeting, were also going on.

At about 4 pm when the meeting had just begun, about 50 radicals, members of RSS, Bajrang Dal and BJP, led by an RSS leader Byresh and the local BJP President Venkatesh mounted an attack against the participants of the prayer meeting. They beat up the believers and disturbed the meeting and dispersed the participants. They also abused them using the filthiest language and alleging them that they are forcibly and fraudulently converting Hindus to Christianity.


They destroyed all the food along with other dishes by upturning all the cooking vessels. The sad part was that all this was being done right in front of 4 police constables, who were accompanying them. The policemen were silent spectators to all that was going on rather than protecting the innocent victims of the high-handed behaviour of the activists of the Sangha Parivar outfits. Since the target of the entire attack was Pastor Raju, the believers had successfully managed to protect and take him away from the scene of the attack.


The disappointed Hindu fanatics who had become furious by then, caught hold of a few believers - one blind believer named Samuel and his wife, along with three other believers Nagaraj, Venkatappa and Raju got them all arrested and took them to the Arasikere Police Station and kept them in the police station throughout the night. The police had seized a tractor and a tempo used for transporting the participants for the meeting along with cooking vessels and taken them to the police station.


The Global Council of Indian Christians (GCIC), which came to know about the incident, immediately got in touch with the concerned Sub Inspector Mr. Nagaraj and succeeded in getting Samuel and his wife released late at night. As the target of the entire exercise seems to be Pastor Raju, the Hindu radicals have lodged a complaint against Pastor Raju falsely alleging that he has been fraudulently converting people in the villages to Christianity and that he must be sent away from his village permanently. Hence the police seem to have laid down the condition that Pastor Raju must surrender before the police and that only then the remaining 3 believers, the two vehicles and the cooking vessels would be released.