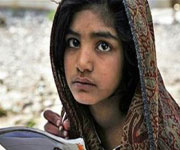 The Muslim cleric who accused a young Christian girl of blasphemy has been arrested by Pakistani authorities on suspicion of planting evidence against her. Rimsha Masih's family say she is 11-years-old and has Down's Syndrome. She has been held in police custody for the past two weeks after being accused of blasphemy. Muslim neighbours accused Rimsha of burning pages of the Koran. The accusation caused hundreds of Christians in her home town of Mehrabad to flee.

Muslim cleric Khalid Chishti, who led the blasphemy charge against Rimsha, was reportedly arrested by police after people in Mehrabad came forward to say that he had torn pages from a Koran and placed them in Rimsha's bag, which was carrying burned papers. He made a brief appearance in court on Sunday and is being held in police custody. Pakistani Christians in Pakistan and in the UK have been protesting Rimsha's arrest.


Christians gathered outside the Pakistani High Commission in London last week to call for her release. There were also protests in Manchester and Glasgow over the weekend. Blasphemy is a serious crime in Pakistan, punishable by death. Christians complain that they are falsely accused of blasphemy to settle personal scores or appropriate their land. Christians accused of blasphemy are often attacked by radicals and even when the charges are dropped, are forced to go into hiding along with their families because of the threat to their lives.