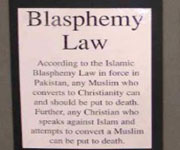 The President of Pakistan Christian Congress has demanded that President and Prime Minister of Pakistan to re-investigate all cases of blasphemy that have been officially filed with local authorities. Nazir Bhatti said allegations of evidence tampering by an Islamic cleric in the Rimsha Masih blasphemy case has confirmed his suspicions that Pakistan's notorious blasphemy laws have been widely misused by Muslims against minorities and their communities. Earlier this month, a court in Islamabad ordered Rimsha released on bail by two personal surety bonds of 10,00,000 Pakistani Rupees each.

Sources close to the Pakistan Christian Post revealed that Inter-Services and Military Intelligence agents played an important role in the case by secretly recording the statements of dozens of Mehrabad's Muslim residents, thus establishing that an Imam had planted burnt pages of the Qu'ran in Masih's shopping bag.


Bhatti credited Pakistan's secretive intelligence agencies for the release of Rimsha, but there are more than two dozen Pakistanis accused of blasphemy still behind bars awaiting trial while others have been assassinated outside of the courts. Earlier this month, a court in Islamabad ordered Rimsha released on bail by two personal surety bonds of 10,00,000 Pakistani Rupees each; she was secreted away by an armored vehicle to a helicopter that flew her to an undisclosed location.