Pastor and Christian Believers beaten up in Karnataka 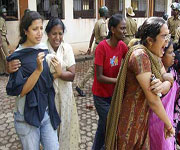 Pastor Damodar, 42, is in charge of a house church at Sagar, Shimoga District of Karnataka in India. He has been doing his ministry during the last three years and he has a congregation of about 15 believers. He lives with his wife, Rathna, 28, and two of their children, a boy and a girl. He belongs to the Vishwakarma Brahmana community. On Wednesday, he had organized a prayer meeting in the evening at the residence of a believer, Smt. Sunandamma of Taligoppa and a few believers were also present at the prayer meeting.

Just as the prayer programme was in progress, about 15 Hindu radicals led by one Omkara, forced themselves into Sunandamma's house and began attacking the pastor and the believers. They began kicking them and slapping them while falsely alleging them that they were forcibly and fraudulently converting Hindus to Christianity. They were also using very foul language while abusing and cursing them. Then they telephoned to the Taligoppa police Station and lodged a complaint against the Christians. The police immediately came to the place and then joined the Hindu fundamentalists in beating and kicking the believers. Subsequently they arrested and took the pastor to the Taligoppa Police Station for further inquiry and then to file a charge-sheet against him.


In the meantime the Global Council of Indian Christians (GCIC) came to know about the attack and got in touch with the local Police Circle Inspector, Mr. Sitaram, and briefed him about the attack against the Christians without any provocation. The Circle Inspector, we understand, got the pastor from Taligoppa to Sagar Police Station late in the night and held an impartial inquiry and released the pastor without filing an FIR.


It is also learnt that he undertook in writing from the pastor that he would not go round and forcibly convert Hindus to Christianity as alleged by the opposite party and also took in writing from the Hindu fundamentalist group that they would not interfere with prayer meeting of Christians. The pastor who was also wounded was being treated in a private hospital in Sagar.