Pope Benedict XVI says humility is the way of God 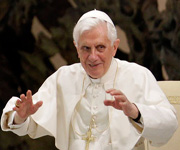 Pope Benedict XVI is calling upon Christians to follow the example of Jesus Christ in becoming "last of all and servants of all." "A key point in which God and man are different is pride," said the Pope during his Angelus address to pilgrims at Castel Gandolfo Sept. 23. "We, who are little, desire to appear great, to be first; while God, who is truly great, is not afraid to humble himself, and make himself last." The Pope drew his reflections from today's Gospel according to St. Mark in which Jesus announces his impending death and resurrection. His disciples, however, "did not understand the saying, and they were afraid to ask him."

In response to discussions among the twelve apostles as to who was greatest Jesus informs his closest followers that "if anyone would be first, he must be last of all and servant of all." "It is clear," observed the Pope Benedict XVI, "that between Jesus and the disciples there is a deep interior distance; they are, so to speak, on two different wavelengths." This once again reminds us "that God's logic is always 'other' with respect to our own," he said.


Reminding pilgrims of the words of the Prophet Isaiah, the Pope said that God's thoughts are not our thoughts and God's ways are not our ways. And so, "following the Lord requires of each person a profound conversion, a change in his or her way of thinking and living, it requires us to open our hearts to be enlightened and to be inwardly transformed."


The model for this form of living, concluded the Pope, is the Virgin Mary who is "perfectly 'in tune' with God" and can therefore teach Christians "to follow Jesus faithfully on the path of love and humility."


Pope Benedict then led the pilgrims in praying the midday Marian prayer, the Angelus, before addressing various groups in their native language. He concluded by imparting his apostolic blessing and wishing all present at "una buona domenica," a "good Sunday."