Prayer is Best Source of Courage for Facing Hostile World 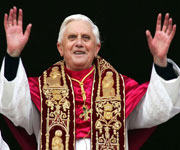 Pope Benedict XVI says the heroic sanctity of St. John the Baptist proves that a solid life of prayer is the best source of courage for Christians facing a modern world that is hostile to God and those who love him. "The martyrdom of St. John the Baptist reminds us, Christians of our time, that we cannot stoop to compromises with the love of Christ, his Word and the Truth. The Truth is the Truth and there is no compromise," the Pope stated in his Aug. 29 general audience address at Castel Gandolfo. Christian life, he said, requires a "daily martyrdom of fidelity to the Gospel" which can be defined as the "courage to let Christ grow in us and direct our thinking and our actions" and can only occur through a "solid relationship with God."

Pope Benedict also reflected on the contribution of prayer. "Prayer is not a waste of time, it does not rob much space from our activities, not even apostolic activities, it does the exact opposite: only if we are able to have a life of faithful, constant, confident prayer will God Himself give us the strength and capacity to live in a happy and peaceful way, to overcome difficulties and to bear witness with courage," he said.


The Pope's words were part of his ongoing weekly catechesis on the theme of prayer, with today's focus being on the prayer life of Saint John the Baptist. Since Aug. 29 is the liturgical memorial of the martyrdom of John the Baptist, Pope Benedict noted that he is the only saint whose birth and death are celebrated on the same day. St. John the Baptist was martyred following his denouncement of King Herod's incestuous marriage to Herodias, who was his brother Philip's former wife and also King Herod's niece.


"For the love of truth, he did not stoop to compromises with the powerful and was not afraid to use strong words with those who had lost the path of God," said Pope Benedict. "Where does this life of rectitude and coherency, this interior strength, completely spent for God and to prepare the way for Jesus, come from?" asked the Pope. "The answer is simple: from his relationship with God, from prayer, which is the main theme of his whole existence."


Reflecting upon the life of St. John the Baptist, Pope Benedict observed that since his conception the prophet's existence was underpinned by prayer, beginning with his father Zechariah's song of praise, the "Benedictus," which is now recited by many Catholics during the early morning prayer of the Church.


His example of a prayerful life is so significant, suggested the Pope, that when the disciples asked Christ to teach them the Our Father, their request is formulated with the words "Lord teach us to pray, as John also taught his disciples." "St. John the Baptist intercedes for us, so that we always maintain the primacy of God in our lives," concluded the Pope, before leading the faithful in the singing of the Our Father in Latin. Source: CNA/EWTN News