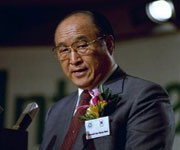 The Rev Sun Myung Moon, the Founder of the Unification Church and self-proclaimed messiah, died early Monday in South Korea. He was 92. Moon died of complications related to pneumonia at a church-owned private hospital in Gapyeong near his home. The South Korean leader was known for performing mass weddings, including one in 2009 that involved 10,000 couples at Sun Moon University outside of Seoul, South Korea. Despite Moon's emphasis on the importance of marriage, he divorced his first wife, Sun Kil Choi, in 1952. His second wife, Hak Ja Han, gave birth to 14 children, but one daughter died in infancy. Moon declared that he and his wife are the "true parents of all humanity", and are known in the church as the True Family and their children the True Children.

Rev Sun Myung Moon, the Founder of the Unification Church

Marriage is a central part of the Unification Church because Rev Sun Myung Moon believed that Jesus Christ had failed his mission despite dying on the cross because he did not marry and have children. The self-proclaimed messiah said that he would complete Jesus' mission by marrying, producing sinless children and blessing couples in the church who would bring forth more sinless children. Marriage in the Unification Church is not just a personal issue but an essential part to gaining salvation.


But a tell-all biography by the ex-wife of Moon's eldest son Hyo Jin Moon revealed a broken and dysfunctional family. Nansoon Hong in her 1995 book wrote that her ex-husband Hyo Jin Moon used cocaine, watched pornography, was a womaniser, and even beat her when she was seven months pregnant, according to The New York Times. "Ms Hong portrayed the entire Moon family as dysfunctional, spoiled, and divided by intrigue and hypocrisy," the paper wrote. Despite Christian sounding names and titles, the Unification Church is regarded as a cult because Moon claims that he is the Messiah and to get to heaven you must marry.


In 2004, members of Congress gathered at a Senate office building for an event hosted by the Interreligious and International Federation for World Peace, an affiliate of the Unification Church. Moon and his wife had gold crowns placed on their heads in front of members of Congress who were bewildered that they were part of a coronation ceremony of the Unification Church. Moon said during the event that government leaders had "declared to all heaven and earth that Reverend Sun Myung Moon is none other than humanity's savior, messiah, returning lord and true parent," according to the Times.


James Beverley, professor of Christian Thought and Ethics at Tyndale University, explained to CP that "Moon denies the Trinity, minimises the sovereignty of God, and teaches salvation based partly on human works, including payment for liberating ancestors".


Moon founded or financed businesses that included The Washington Times, the University of Bridgeport in Connecticut, the New Yorker Hotel in Manhattan, and a commercial fishing business that supplies much of the fish used in sushi restaurants in the US. In South Korea, Moon's business extends to newspapers, hospitals, ski resorts, education, pharmaceuticals and construction.


"The Unification movement was popular in the 70s and 80s but membership has gone downhill in the United States and Canada and most parts of the world," Beverley noted, in part because of Moon's conviction of tax evasion that resulted in him serving 13 months in a US federal prison in the 1980s. However, "Moon has many followers in South Korea and Japan."