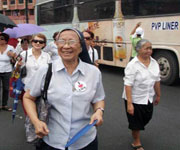 Sister Mary Pilar Verzosa, (67), the founder of Pro-Life Philippines, died yesterday from Herniation Syndrome secondary to cerebral bleeding, days before her 68th birth anniversary on September 24. The Good Shepherd nun suffered an aneurysm on Thursday while giving a lecture to students at De La Salle University in Cavite City. She later slipped into a coma from which she did not recover. Verzosa's remains were cremated and taken to the Good Shepherd Convent on Aurora Boulevard in Quezon City last night for a three-day wake. She had been breathing with the aid of an artificial respirator until her death.

Leading churchmen paid tribute to the nun who started the Philippine pro-life movement 1974 and became one of the staunchest advocates of life and family. "We know that her life was devoted to the appreciation of life," said Archbishop Jose Palma of Cebu, President of the Bishops' Conference. "She lived such a life of goodness and dedication. Sister Verzosa's dedication should serve as an inspiration for all to care for life." "It is for us to continue what she started," said Manila Auxiliary Bishop Broderick Pabillo.


She established Pro-Life Philippines after attending a seminar by Rev. Fr. Paul Marx, the late founder of Human Life International (HLI). The pro-life advocate came into the country a year after the 1973 Roe vs. Wade Supreme Court decision that legalized abortion on demand in the United States. Verzosa, until her death, was a member of the Religious of the Good Shepherd (RGS) that advocated for Filipinos to keep and hold on to their life-affirming values.