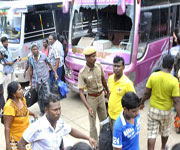 Five buses carrying Sri Lankan pilgrims to the Trichy airport were attacked by activists of Tamil outfits on Tuesday, according to media reports. Pilgrims were injured by broken glasses inside one of the buses, reports said. Earlier on Tuesday, a batch of 178 Sri Lankan pilgrims faced protests, with a pro-Tamil outfit trying to block their vehicles when they were returning after offering worship at the famous Velankanni Christian shrine near Nagapattinam. Sticks and stones were hurled by the activists near Kattur at three of the seven buses on their way to fly back home, leaving three with bruises as they rushed out of the vehicles, police said.


As a result Sri Lankan nationals have been told by the Government to desist from undertaking visits to Tamil Nadu until further notice. The ministry said that in the event there is a compelling reason to visit Tamil Nadu, such a visit should take place following prior timely intimation to the Sri Lanka deputy high commission in Chennai. Travel to all other states in India are safe for Sri Lanka nationals, the external affairs ministry said.


The Lankan nationals were meted out similar treatment during their pilgrimage to the Poondi Madha Christian shrine near Thanjavur on Monday. The pilgrims, including 75 women and 36 children, had arrived at Velankanni on Tuesday morning to offer worship at the Shrine Basilica, police said. As the activists protested, police personnel on security duty for the ongoing annual festival rushed to the spot, arrested them and brought the situation under control within a few minutes, sources said.


The pilgrims later proceeded to Tiruchirappalli safely from where they are expected to leave for Sri Lanka. The Sri Lankan nationals had worshipped at the Poondi Matha shrine on Monday evening as part of their annual pilgrimage when activists of Naam Tamizhar Iyakkam headed by film director Seeman, Viduthalai Chiruthaigal Katchi and P Nedumaran-led Tamizhar Desiya Poduvudamai Katchi, staged a demonstration asking them to go back.