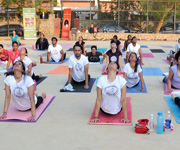 A United Kingdom church, St Edmund's Church has banned yoga classes, terming the physical exercise "not compatible" with the Catholic faith. "Yoga is a Hindu spiritual exercise. Being a Catholic church we have to promote the gospel and that's what we use our premises for," Father John Chandler of St Edmund's Church, where yoga classes were to be held. Yoga instructor Cori Withell said the classes she booked for yoga and pilates at St Edmund's Church building in Southampton were cancelled with 10 days to go.

Its administration told Yoga instructor Cori Withell that classes were cancelled because yoga is a Hindu religious activity, the Sun tabloid reported. She said the church accepted the booking two months ago and she paid 180 pounds. She was called later and told that yoga was from another religion so she could not have the hall. A separate pilates class she had booked was also cancelled. "I had never heard about any religious issue with yoga before but I have looked into it since and found that some other religions feel that when people meditate it could let the devil inside them," she said. Withell said that there was never any meditation in her class. "It was just exercises. Yoga is spiritual, but not religious," she added.


Meanwhile, a spokesperson for Portsmouth Catholic Diocese said, "It's not possible for Catholic premises to be used for non-Christian activities and there is a dilemma with yoga as it can be seen as Hindu meditation or as relaxation." "There is no national policy on this and the decision is for each priest," the spokesperson said.